USA – Wettest May on record 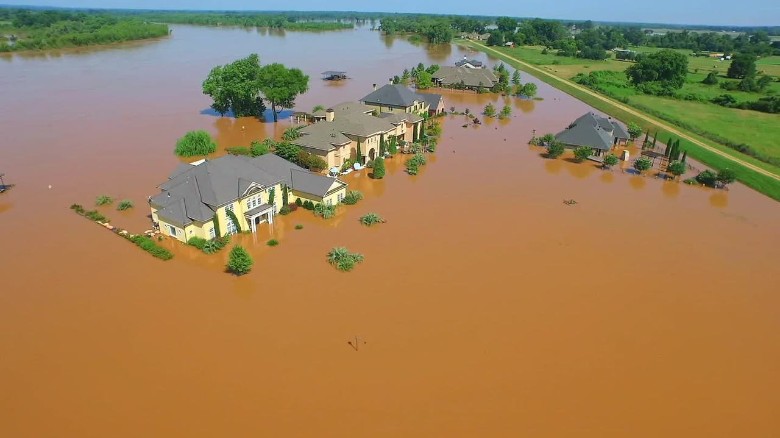 In some areas of the United States, the rain in May must have felt like it was coming down in biblical proportions.

Perhaps it wasn’t quite that much, but it did fall in dramatic totals in 20 states and for the country as a whole, U.S. officials said this week.

In 121 years of record keeping, never had an average of 4.36 inches (11cm) of precipitation fallen on the contiguous United States. The number was 1.45 inches above the long-term average for the months, the National Centers for Environmental Information said. It beat the old mark by .07 inches.

Three states — Colorado, Oklahoma and Texas — set record totals for rainfall in May. In Oklahoma and Texas, where flooding killed dozens, precipitation was almost two times the average and the most in any month ever.

“The main culprit was a stuck weather pattern that kept storm after storm moving into the Southern Plains,” CNN Meteorologist Dave Hennen explained. “Days and days of rainfall led to the flooding, as storms developed over the same areas every day. This was especially true in Texas and Oklahoma.”

One of the waterways in that area of the country affected by the rain is the Red River, which begins in Texas. It also touches Arkansas, Oklahoma and flows into Louisiana. As of Wednesday, it was cresting at 37.05 feet in Shreveport, Louisiana, well above flood stage.

Louisiana and 16 other states were wetter than average last month, the center said. Before May, 37.4% of the United States was in drought, but as of June 2, only 24.6% is in that condition.

“There is some thought that the (climate) condition known as El NiÃ±o may have played a role” in the massive rain total in parts of the country, Hennen said. “The warming of the waters of the Central and Eastern Pacific can cause changes to the upper air patterns that can lead to more rain through the Southern U.S.”

While the Southern Plains got relief, other areas of the country were increasingly dry in May. The center said drought conditions developed or worsened in sections of the Northeast, Northwest and Southeast. While no state had a record dry May, seven in New England or the Southeast were much drier than average.

The lower 48 states went through a month near the median value in terms of temperature, said the center, which is a department of the National Oceanic and Atmospheric Administration.

Two things helped hold down temperatures. The limited amount of sunshine was certainly a factor, with numerous storms blanketing the region under extensive cloud cover. High humidity also was a factor, Hennen said. Moist air takes longer to heat up, he said.

Meanwhile, Alaska, which has kept records for 91 years, was the warmest it has ever been in May — 7.1 degrees above average.

While global temperatures have been setting records, the first five months in the United States ranked as the 17th hottest for the contiguous United States in that period, officials said. California continues its heat trend, breaking last year’s mark for hottest January through May.

The June national forecast continues to signal wetter than average conditions in the Southern Plains and along much of the East Coast, although the records we saw last month are not expected.

The below normal temperatures are expected to continue for the Southern Plains, while both the East and West coasts see above-normal temps. The forecast is based mainly on El NiÃ±o conditions that are expected to strengthen through the summer, Hennen said.