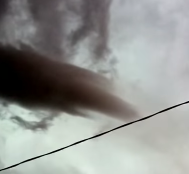 It’s not the sort of thing you expect to see on your way back from a wedding reception.

Travis Hafield posted the video above to his YouTube channel Saturday, showing what appears to be either a tornado forming, or a very well-defined funnel cloud, as tornado sirens wail in the background in the Montana town of Baker.

That video does not show the funnel making contact, but Hafield posted a second video later, as he and his family fled the scene, showing what appeared to be a debris cloud at ground level, though the bottom of the tornado is not visible.

It’s not clear if that is the same tornado confirmed by the National Weather Service to have moved through Baker Saturday night a little after 7 p.m. Officials in the county reported late Saturday that a second tornado was believed to have touched down, according to KX News.

Though no deaths or serious injuries have been reported, county officials reported at least two homes were destroyed, with another 10 damaged.