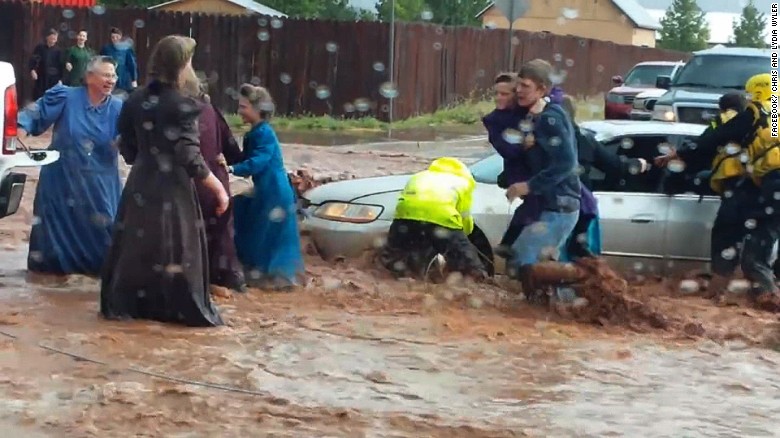 Eight people died and five others are missing after a flash flood washed away vehicles at the Utah-Arizona border, the Hildale, Utah, fire department said.

All the victims are mothers and small children, Assistant Fire Chief Kevin Barlow said. The youngest child was about 4 years old.

The flooding ravaged a community that straddles the border from Hildale, Utah, to Colorado City, Arizona.

The flash flood started with heavy rains Monday evening in the canyons above Hildale, Barlow said. The rush of water was so intense it washed two vehicles several hundred yards downstream.

“Most of the people were thrown from the vehicles,” Barlow said.

“It happened within like a half-hour, 45 minutes,” he said. “(Then) it was just gone. And then the sun was shining again.”

By late Monday night, he said, the water had mostly receded. Nearby residents were trying to organize volunteers on social media to help search for those missing.

Additional thunderstorms are expected in the area Tuesday afternoon, the service added.

Utah Gov. Gary R. Herbert said the state is offering “its full resources to the town of Hildale to aid with the search and rescue effort.”

“I am heartbroken to hear of the recent tragedy in Washington County,” the governor said.