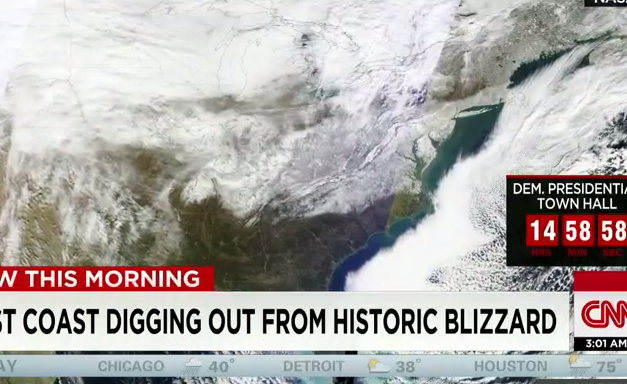 Millions were making their way back to work Monday after a weekend snowstorm that socked the Northeast. Here’s what you need to know:

â€¢ All three major New York-area airports were open, but hundreds of flights were canceled. Washington airports will be running a limited flight schedule Monday.

â€¢ Public schools in Washington and Philadelphia and some New Jersey and New York City schools will also be closed Monday.

â€¢ The storm is blamed for at least 16 deaths across six states and Washington.

The bottom line: Just because the snow’s stopped falling doesn’t mean it’s back to business as usual.

“Every state that picked up some snowfall is going to be looking at refreezing every night,” CNN meteorologist Tom Sater said.

The possibility meant officials warned of dangers Sunday even as they trumpeted the progress in the cleanup after the storm.

“We will see continued slick and dangerous roadways, so continue to stay off the road,” Washington Mayor Muriel Bowser told reporters.

“I’m asking for residents to continue to be patient. … A record amount of snow must be removed,” she said.

The Long Island Rail Road, which officials said sustained significant damage during the storm, had six of its 12 branches at least partially running by 7 a.m. Monday. The others remained closed.

Limited flights were set to resume Monday at airports in Washington, where officials said crews were working to dig out runways.

Officials said there was more work to be done, and schools and government offices in many areas were set to remain shuttered.

As cleanup continues, U.S. government offices in the Washington area will be closed Monday, officials said.

So will state government offices in Maryland and Virginia, the governors said.

“Tomorrow morning, conditions will be icy and dangerous,” Maryland Gov. Larry Hogan said in a written statement Sunday. “By closing state offices tomorrow, crews can carry on with their work to clear state roads.”

At least 16 people have died as a result of the storm — six in North Carolina, three in Virginia, one in Kentucky, three in New York City, one in Maryland, one in Ohio and one in Washington. Officials have cited a higher collective death toll, but CNN has not been able to confirm the individual reports, and it’s unclear if all reports of death are weather-related.

Officials in New York and Baltimore also said there were reports of people dying while shoveling snow.