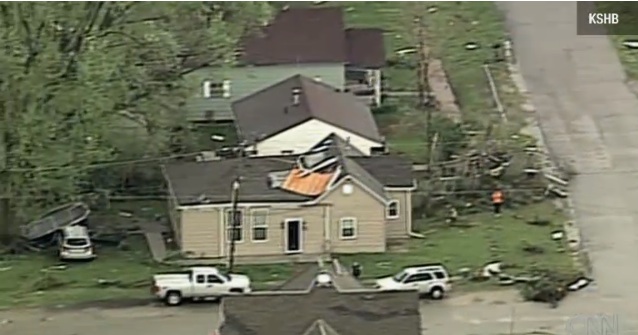 An apparent tornado touched down Saturday afternoon (US) in a small town east of Kansas City, Missouri, blowing roofs off houses and toppling trees and power poles, the National Weather Service said.

There was no immediate word on injuries.

The damage in Orrick appeared to be typical for a tornado, but a determination on whether it was indeed a twister and the scale would have to wait another day, said Rich Thompson, lead forecaster at the National Weather Service Storm Prediction Center in Norman, Oklahoma.

Debris was scattered throughout the town. A silo crashed to the ground and trees were either ripped out of the ground or torn in half. Residents looked stunned as they surveyed the damage.

Amy and Jerry McNary discovered their two Australian shepherd puppies, amazingly, were alive in their open-air enclosure, though a bit muddy. The McNarys’ chicken coop next to the dogs was turned upside down, but all 15 chickens were unhurt.

Their yard was full of storm debris.

His wife said the town of about 900 will recover. Orrick is about 30 miles east of Kansas City.

“Orrick’s a good community,” Amy McNary told KSHB. “I’m sure everyone will help out. We have a strong community here.”