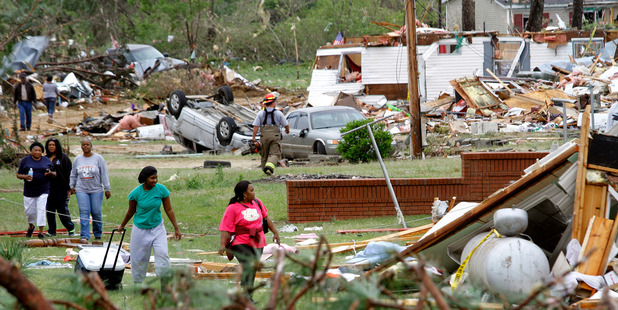 A two-day outbreak of twisters and other violent weather that pulverized homes from the US Midwest to the Deep South has killed at least 35 people.

Here are some stories from people in Arkansas, Mississippi and Alabama who made it through the frightening chaos.

In one hard-hit community, Mars Hill, about 19 kilometres southwest of Louisville, Mississippi, a mix of poultry farms, mobile homes, single-family homes, and open fields dot the landscape. William Quinn, 25, was removing valuables from his flattened mobile home that overlooked the Pine Ridge Farm.

Quinn recalled seeing the tornado approach on Monday and running with his fiancee more than 100 yards to his boss’ house, also located near the farm. Quinn, his fiancÃ©, his boss, and his boss’ daughter all hid under the house as the tornado blew over.

“The tornado was here. We could see it. It was kind of a grayish purple,” he said. Everyone survived though the boss’ house suffered heavy damage.

Quinn’s mobile home was nothing but rubble.

When the TVs switched back from tornado warnings to regular programming, Darrell Haney thought his community outside Fayetteville, Tenn., was out of the woods. Then, live weather reports cut back in, warning of a possible tornado as little as a minute away from his home.

Haney quickly retrieved two grandchildren and huddled in an interior bathroom with his wife, daughter and son-in-law. Almost immediately, he said, a tree crashed into a front room where one of the children had been sleeping. Then the roof was lifted off of the master bedroom.

“You know, the house is being torn apart around you, and we’re just crying out, ‘God protect us,'” Haney said. “Because at that point you’re totally hopeless and helpless.”

Surveying the damage, the pastor and a school bus driver tried to put positive light on the destruction that included his nearby church and the school bus.

“Everything’s gone,” he said. “But the main thing is everyone’s OK, the lives are taken care of.”

Fred Muawad has been through this before. Three years ago, his popular Daylight Donuts in Vilonia, Ark., survived a tornado.

This time, it didn’t. The strong twister that struck the town of 3,800 on Sunday virtually wiped away the strip mall that housed Muawad’s small shop.

He didn’t have insurance, and since he’s not sure of the strip mall will rebuilt, he wasn’t sure if he’d reopen. One thing was for sure: Vilonia was behind him.

“This community has been great to me – we’ve been one big family for 11 years,” Muawad said Tuesday. “We’ve been through good times and bad.”

The bad has happened twice in three years. Two twisters hitting the same town three years apart may seem a cruel twist of fate, but people in this exurb of Little Rock said the kindness and warmth of the people trumps anything Mother Nature can throw at them.

One of the hardest-hit areas in Louisville, Miss., was the dozen-building Eiland Plaza apartment complex, where authorities were still limiting access.

Yolanda Triplett was in her ground-floor apartment Monday when the tornado hit.

“I was laying on my couch and I heard it,” Triplett said. “So I went to my hall closet and that’s where I was when it hit.”

When Triplett came out, her apartment and belongings were shredded.

“I had no windows, water was in there, bricks on the outside were torn off,” she said.

Triplett was one of 71 people who stayed in an American Red Cross shelter at Louisville’s First Baptist Church Monday night. Like some other residents of the apartment complex, she hadn’t figured out yet Tuesday where she would go. “Not yet,” she said.

Mark Wade and his family heard the dire warnings on TV and the tornado sirens, and were prepared to ride out the storm in their closet when a neighbor across the street on Vilonia’s Aspen Creek Drive in Arkansas, yelled out: “Come over! We’re going in the storm cellar!”

So Wade, his wife and 3-year-old son joined 10 other people and seven dogs in a cramped underground shelter Sunday evening. When they emerged, their homes were gone. All gone. Stripped to the foundation.

“If we hadn’t gone to that cellar I don’t know if we would be here,” Wade, 28, said Monday, picking through the debris of what was once his home.

Along back roads of East Mississippi, the town of Noxapater, estimated pop. 470, has a 16-member volunteer fire department led by 74-year-old D. J. Reed.

Reed wore a well-used baseball cap and neon yellow vest with “Noxapater Fire” written on it Tuesday as he and other volunteer firefighters remained watchful for any more storms. He and others had spent hours clearing fallen trees from roads and helping with rescue and recovery efforts.

“I’m going to tell you what – it’s just plain disastrous,” Reed said, a cigarette dangling from his mouth.

Reed, a slim man with tough hands, was born and raised in the area. He built forklifts before he retired. Now he runs the fire department, which has a few emergency vehicles, and is the go-to -man for all things Noxapater. He even mows the green areas in the town.

Right after the tornado, Reed thought the main problem would be removing trees from homes. Then it became a search-and-rescue mission after word came of the injured and dead.

“That’s when it strikes you more, when it’s people you know all your life,” he said.

After the tornado pounced on Tupelo, Miss., one gas station looked as if it had been stepped on by a giant. Francis Gonzalez owns a convenience store and Mexican restaurant attached to that station. Gonzalez, her three children and two employees ducked for cover in the store’s cooler shortly after a cellphone blared a tornado warning.

Within seconds, the wind picked up and glass shattered. The roof over the gas pumps was reduced to aluminum shards. A nearby SUV had its windows blown out. The storefront window had a large hole in it. Debris lay everywhere.

Stunned by the destruction all around, she said in Spanish: “My Lord, how can all this happen in just one second?”