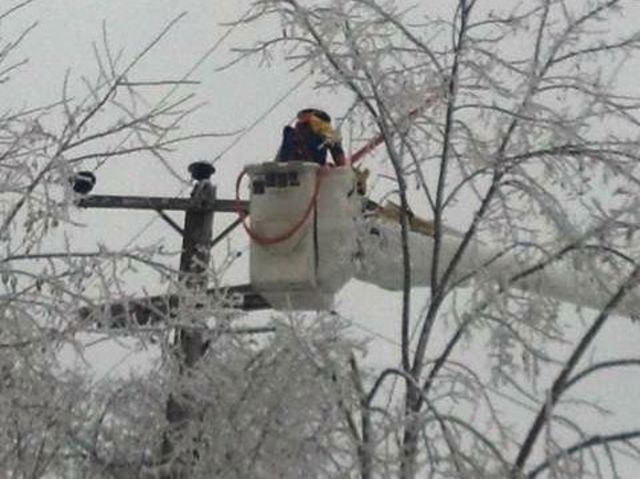 Bonita Thomas was thankful to be in a warm Michigan shelter Wednesday, but it wasn’t the Christmas she’d imagined.

Thomas was one of tens of thousands of customers still without electricity in Michigan, southern Ontario and parts of the U.S. Northeast Wednesday, days after wintry storms left them scrambling for alternatives to stay warm in below-freezing temperatures.

Thomas wanted to host her grandchildren in her Flint-area apartment for Christmas, but her building lost power on Monday, two days after ice storms and wind began toppling trees and knocking down power lines in the state.

She did her best to stay without powered heat, wrapping herself in layers. But temperatures fell to the single digits Tuesday morning, and it was too much — she called her grandkids’ father, told them to stay home, and she went to a Red Cross shelter.

“It got kind of drastic — you hated to get up even to go to the bathroom because the seat was too cold,” Thomas, 51, said Wednesday by phone from the Red Cross’ Genesee-Lapeer chapter in Flint, where she and her two adult daughters were among 75 people taking shelter. “It was just getting too hard to bear.”

Utility crews, bolstered by workers called in from other states, were working around the clock in the affected areas, but difficult weather conditions — including more snow and brisk wind in Michigan Wednesday — were making power restoration a challenge.

Travelers looking to head home Thursday should avoid any storms. Most of the nation will remain fairly quiet. There will be some snow across the Great Lakes and Northeast in the next day or so. Additional snowfall totals likely will be just a few inches.

Some utilities reported that the last outages might not be fixed until the weekend, and power crews and customers alike are expected to face below-freezing temperatures until then.

That’s down from 470,000 customers earlier in the week for the two Michigan utilities.

Parts of western Michigan were under a winter weather advisory until Thursday morning, with high temperatures expected to reach only the mid-20s on Christmas and Thursday and wind chills nearing zero at night. With several inches of snow and winds of around 15 mph expected Wednesday, more tree damage and power outages were possible, the National Weather Service said.

Nearly 370 people were taking refuge Wednesday in Red Cross shelters in Michigan, Vermont and Maine, according to the relief group’s online shelter tracker.

At the Flint shelter, the Red Cross was supplying three daily meals, snacks and cots to sleep on. The clients ranged in age from 4 months to 101 years old, and some of them had been there since Saturday, volunteer disaster action team coordinator Annette Swain said. The community stepped up with donations of food and blankets and other help, Chapter Executive Director Tony Lasher said.

About 72,000 Toronto-area customers still were without power following the weekend ice storm, utility Toronto Hydro said around noon Wednesday. The temperature in Canada’s most populous city was -10 C (14 F) around noon; Thursday’s high was expected to be around -1 C (30 F).

More than 300,000 customers in the Toronto area had no electricity immediately after the weekend ice storm, which Toronto Mayor Rob Ford called one of the worst to hit the city.

About 700 customers had no power in parts of Vermont on Wednesday night, down from 2,000 earlier in the day, Vermont Electric Cooperative spokeswoman Liz Gamache said.

The last outage might not be fixed until the weekend, thanks to the “magnitude of damage,” she said.

“Heavy ice is still an issue,” said Gamache, adding that the ice built up over three days. Trees still are falling, creating more outages even as crews restore power in other areas, she said.

Temperatures in northern New England were expected to hit highs in the low teens Wednesday, dipping into the single digits at night. Thursday temperatures were forecast to reach the 20s, the National Weather Service said.

Generators and backpacking stoves in Michigan

In western Michigan’s Johnston Township in Barry County, Jason Buckner and his family — without electricity since Sunday morning — used camping equipment to cook their Christmas Eve meal Tuesday night, CNN affiliate WXMI reported. They used a generator to power some of their devices.

“Just something simple. Hot dogs and cooking on backpacking stoves, and there you go,” Buckner told WXMI.

“Hopefully we will at least be able to break even,” said Jeff Meyer, who was frying donuts at his bakery. “I am just trying to salvage some kind of business during this nightmare of a situation.”

At the Flint Red Cross shelter, Thomas said she’ll stay there until electricity returns to her apartment, which she heard might be Saturday. She said she’s sad that she can’t host her grandchildren, but she’s grateful for the room and board.

“I planned on cooking this big dinner and having them all over … and then this happened,” she said. “It’s kind of depressing, but I just believe … that God’s still on my side. And there’s room at the inn.”