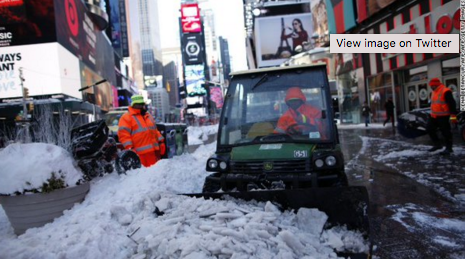 Cities scrambled Sunday to dig themselves out from the snow and ice of a massive blizzard that clobbered the East Coast, but officials warned residents to remain vigilant even as the storm heads into the Atlantic Ocean.

Perhaps New York Gov. Andrew Cuomo put it best when he said, “We’re not out of the woods yet.”

That especially applies to New Jersey, where flooding remains a concern as residents watch high water flood a number of cities along the coast.

While areas worked to return life to normal, the Long Island Rail Road, which “sustained significant damage during the storm,” remained down, and officials in New York, Baltimore and Philadelphia warned that pooling water could refreeze, complicating Monday morning commutes.

Baltimore Mayor Stephanie Rawlings-Blake said her city had experienced a “historic snow event” and promised city workers were working aggressively to get roads and services back on track. She asked residents to do their part by using common sense. Before you go out, she warned, decide first if it’s absolutely necessary. It not, stay home,

“Read a book. Watch a movie. That’s our hashtag,” she said.

In Philadelphia, the blizzard warning ended overnight, and the city had more than 400 plows in the street and was scheduled to conclude emergency operations at some point Sunday, said Samantha Phillips, director of the city Office of Emergency Management.

Broadway shows are back on schedule a day after the blizzard shut NYCâ€™s theater district. https://t.co/wvMLE20bLt pic.twitter.com/TUKPwQB5xg

The sun and rising temperatures in some areas Sunday should aid cleanup efforts, but meteorologists continue to worry about ice.

The storm has killed at least 14 people, grounded thousands of flights and shut down travel in many of the nation’s largest cities. One of the hardest-hit locales was Glengary, West Virginia, a small town about 85 miles northwest of Washington, which preliminary figures show received 42 inches of snow.

But snow wasn’t the only product of the storm. Dewey Beach, Delaware, and Virginia’s Langley Air Force Base both reported 75-mph winds, just over hurricane force.

This nighttime view shows historic blizzard as it moved north of Mid-Atlantic at 1:55 am ET: https://t.co/nFeGaaEIuv pic.twitter.com/Q30MKzjAwg

“I heard commotion out my window and I looked and I saw the raging water,” he said. “It came in to the low-lying areas and it rushed fast.”

The restaurant Pellegrini owns was damaged during Hurricane Sandy in 2012, but he says this surge came from the back bay rather than from the ocean.

Coastal flooding remains a big concern for much of New Jersey due to the timing of the storm.

“I expect our town to be under considerable water,” Pellegrini said.

They worked well during this storm, helping to push back waves that were as high as 20 feet, said Vincent Jones with the Atlantic County Office of Emergency Preparedness.

“They are basically the first line of defense,” he said.

As per usual weather/climate amnesia from the official – it’s worse than we thought crowd and media.

January 28, 1772: This storm was named the Washington and Jefferson Snow Storm since both of their diaries recorded it. The storm left 36 inches of snow (3 feet) in central and northern Virginia and the Washington area. Official weather records did not begin until after the Civil War.

February 1899: The Great Arctic Outbreak of ’99 and the Great Eastern Blizzard of ’99. A snowstorm struck the Washington area on February 8 dumping 14 inches of snow. Extreme cold settled in behind the storm. Quantico recorded a record low of -20° F and Washington, DC recorded -15° F. The blizzard struck on Valentine’s Day dropping 21 inches in Washington and Baltimore.

February 1899: The Great Arctic Outbreak of ’99 and the Great Eastern Blizzard of ’99. The storm had given Washington a snow depth of 34 inches (almost 3 feet) and the city recorded its greatest monthly snow total with 35.2 inches.

January 28, 1922: Exactly 150 years after the Washington and Jefferson Storm came the deepest snow of this century to hit parts of Virginia. This storm is listed as the record. A band of heavy snow stretched across Richmond (19 inches), Washington, DC (28 inches), and Baltimore (25 inches) immobilizing the region.