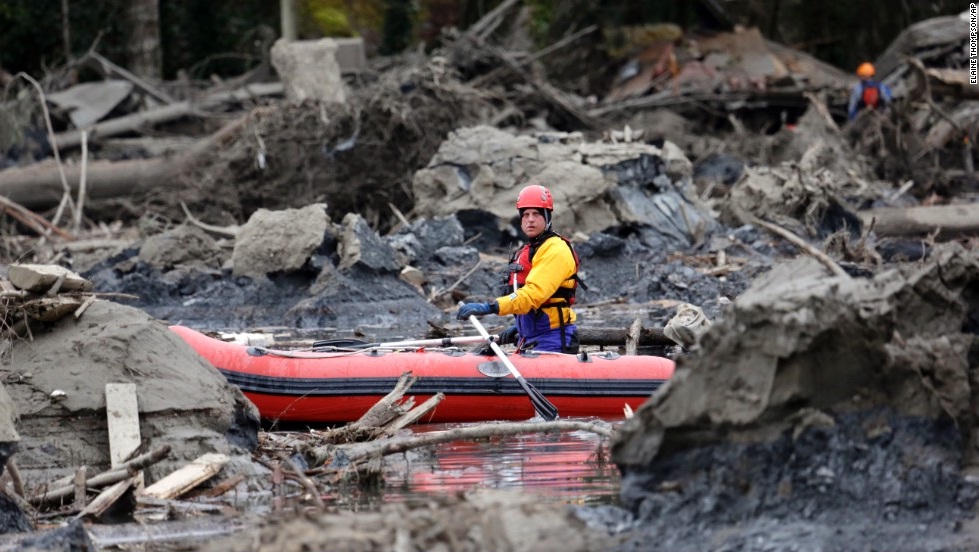 They’ve been at it for parts of five days, using excavators, shovels and their hands to scour stark, dirty, surreal remnants of a landslide that ripped through part of rural Snohomish County, Washington. The first goal: Locate any sign of life.

But the more rescuers dig, the less likely it seems they’ll find it.

County fire district chief Travis Hots has said that 16 people are confirmed dead and another eight bodies have been found but not recovered, with another 176 people still unaccounted for. Given the lack of fresh leads, the lack of new rescues and the scale of the devastation, Gov. Jay Inslee said Wednesday that he doesn’t “think anyone can reach any other conclusion” other than that the death toll will rise significantly.

“It’s been very sad that we have not been able to find anyone living now for probably 36, 48 hours. So it’s extremely discouraging,” Inslee told CNN’s “The Lead.”

The governor added: “We were hopeful that we would find folks who might be protected by a car or a structure, but the force of this landslide just defies imagination. The cars that have been found have just literally been twisted into corkscrews and torn in half.”

Of course, that doesn’t mean authorities aren’t doing everything they possibly can to find hope within the up to 40 feet of mud that has destroyed 49 structures.

Scores of local, state and federal authorities converged Wednesday in and around the roughly square-mile patch of hell located about an hour’s drive northeast of Seattle. They were accompanied by rescue and cadaver dogs plus the coordinated ballet of helicopters in search of any heat source that might indicate a living person or animal.

Unfortunately, they haven’t found much.

“There was no hot spot or no sign that we could direct a team to,” Snohomish County sheriff’s Deputy Bill Quistorf said Wednesday.

As aircraft looked from above, those on the ground used heavy machinery, chainsaws, pumps and their hands to try to save lives or, at least, bring solace to family members by finding bodies.

Steve Mason, a chief with the Northwest Incident Management Team, explained how people and machines worked together to clear rubble quickly while also assuring that no body is left behind. If anything is spotted that might be a person, the process stops.

“They are down there finding people now,” Mason said Wednesday. “It (may not) look like it to you, but that’s what’s going on.”

Could disaster have been prevented?

“We have hundreds of areas … that are very prone to landslides,” Inslee said. “This is hardly unique.”

And the area affected in the most recent calamity has been hit before, in 1951, 1967, 1988 and 2006. Daniel Miller, a geomorphologist who co-wrote a report in 1999 for the Army Corps of Engineers that looked at options to reduce sediments from area landslides, said that none of these events resulted in deaths, though at least the most recent one damaged houses.

This history, along with erosion from Stillaguamish River and worries about overlogging, prompted some mitigation and other effort. A 2010 plan identified the area swept away as one of several “hot spots,” said Snohomish County Emergency Management Director John Pennington.

Residents knew the area was “landslide-prone,” he added. And the county had been saturated by “amazing” rains for weeks on end that made the ground even less stable. Then there was a small, recent earthquake that may or may not have shaken things up more.

Still, that doesn’t mean anyone anticipated an event of the scale of what happened Saturday morning, according to Pennington.

Inslee acknowledged that valid questions remain about whether more could or should have been done to prevent the landslide itself or prevent humans from being endangered because of it.

And they must be answered, the governor said. Just not now.

“We are going to get to the bottom of this,” Inslee said, “after we do everything possible to rescue people.”

When word first filtered in Saturday morning about the landslide, Randy Kay — a helicopter rescue team coordinator in Snohomish County — was one of the first on the scene.

He and others were getting ready to take a training flight when they got the news. They set off expecting to find maybe a single house affected. Fifteen minutes later, they realized it was much worse.

“It was like this moon landscape, with pick-up sticks everywhere,” Kay recalled.

His team quickly went to work, looking for anyone above ground and waving for help from what Kay described as a “mushy slurry (that) once you got into it, there was no way to push yourselves up.”

Among the first they hoisted to safety were two women, “caked in mud, head to toe” on what was left of a roof floating on water. There was also an amputee rescued that first day, as well as a boy, about age 4, deep in mud shivering in a shirt “out there in the middle of nowhere — no homes, no nothing.”

“This kid is a little older than my grandson,” an emotional Kay recalled Wednesday. “If that was Eli, I’d do whatever I had to do … The good news is that mom and kid are back together.”

They were 10 rescues total by air that Saturday by both Snohomish County crews — eight civilians plus two exhausted firefighters stuck in no man’s land — not to mention six more rescued using Navy helicopters. An injured civilian was rescued on Tuesday, said Quistorf.

Authorities have said that at least seven people were injured. One Seattle hospital, Harborview Medical Center, reported Wednesday that five patients were still in its care. They include a 22-week-old boy who was critical but “improving,” two men, ages 37 and 81, in serious condition in intensive care, and two others listed in satisfactory condition.

Unfortunately, the number of dead thus far has far outnumbered those saved.

As Quistorf said Wednesday of his unit’s air crews: “Removing victims — that’s the only mission that they have right now.”