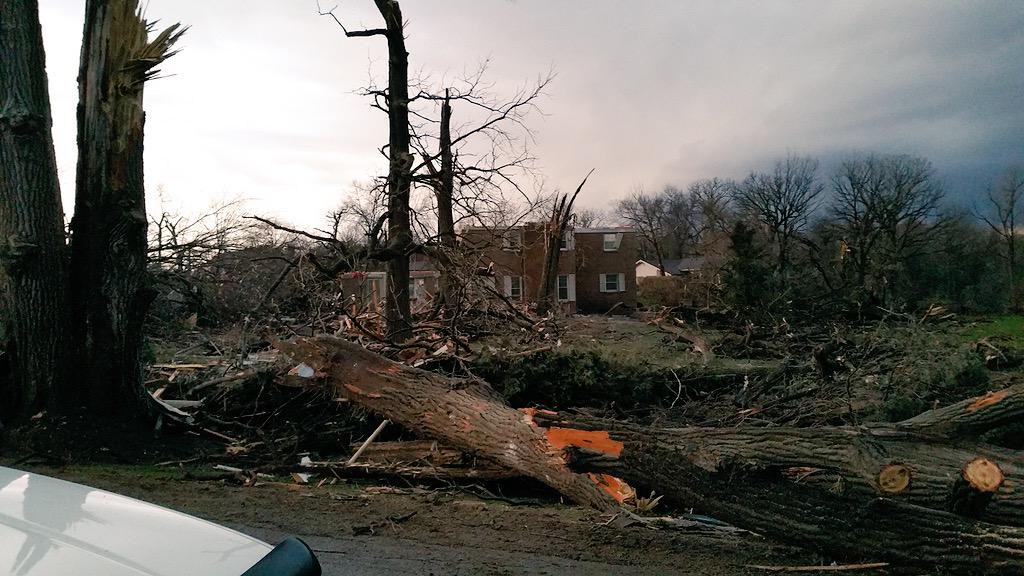 Rescue crews worked through the night and into Friday morning in Fairdale, Illinois, sifting through the rubble of the town devastated by a deadly tornado, but authorities say a couple of people are still unaccounted for.

Kirkland Fire Department Chief Chad Connell said in a Friday morning press conference that the missing may have ventured away from their homes and have yet to contact friends or family members, but crews will continue search and recovery operations until all citizens are located. Connell did not say specifically how many people are missing, and did not identify those who haven’t been found.

“The crews right now are combing the area, looking for anything out of the ordinary,” he said.

Geradine M. Schultz, 67, was killed and 11 more were hospitalized after at least one tornado ripped through northern Illinois Thursday evening at about 7:15 p.m., officials said. During a Friday afternoon press conference, Gov. Bruce Rauner said a second death has been confirmed, 69-year-old Jacqueline Klosa, also in Fairdale. The two victims were next-door neighbors, and Klosa’s body was found during a second search Friday morning, according to The Chicago Tribune.

Rauner issued a disaster declaration for Ogle and DeKalb counties, making state resources available for the areas hardest hit by this storm system.

“Our thoughts and prayers go out to the families impacted. Frankly, we’re very blessed that more people were not hurt; this was a devastating storm,” he said Friday afternoon.

Every home in the community of 200 about 20 miles southeast of Rockford was affected by the storm, authorities said. After crews had a chance to survey the damage in the town, Connell estimated as many as 18 homes were completely swept off their foundations by the large twister.

“It was big. I’ve never seen anything like it in my life,” Connell said of the tornado, according to The Associated Press. Connell watched the tornado move across the area from his front porch.

Matthew Knott, division chief for the Rockford Fire Department, told The Associated Press that 17 structures had been destroyed. “All of the others have sustained damage of some sort.”

The town’s power was out early Friday, and everyone had been evacuated. A shelter was set up at a nearby high school. The Red Cross and Salvation Army were assisting.

Rescue crews worked quickly, going house to house to look for survivors. That’s when they discovered Schultz’s body in the rubble of her home.

The tornado that hit Fairdale was one of at least two supercell-produced tornadoes that developed, according to weather.com senior meteorologist Nick Wiltgen.

A second tornado developed in Cherry Valley at 6:40 p.m. central time. It’s important to remember that all reported tornadoes are unconfirmed until a survey crew from the National Weather Service views the damaged areas and finds the debris was created by a tornado.

However, in the case of the twister that left widespread, severe damage in Fairdale, Rochelle and Kirkland, experts believe it’s a foregone conclusion that it will be confirmed as a tornado on Friday. Severe weather expert Dr. Greg Forbes estimated the tornado at a half-mile wide.