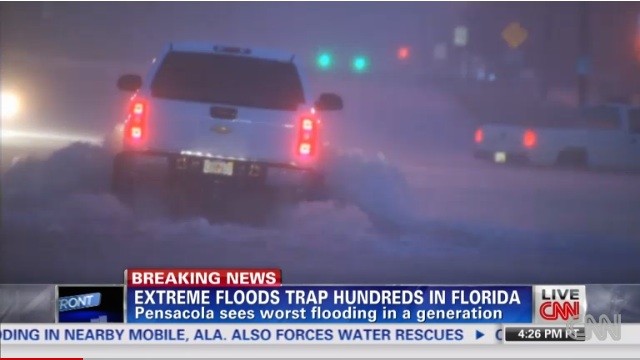 The slow-moving storm system that brought deadly tornadoes to the Plains and the Deep South, and flooding from the Gulf Coast to the Northeast could pop off a few more storms before sliding out to sea, forecasters said Thursday.

But, thankfully, the system doesn’t appear to have enough left to be much more than an annoyance.

Saying the heaviest rains appeared over, forecasters dropped flood watches and warnings in many places while still warning of the potential for continued minor flooding in some — such as parts of New York, New Jersey, Maryland, Virginia, Delaware and Pennsylvania.

On Wednesday, the storm brought a taste of its mayhem to the mid-Altantic states and the Northeast, with flooding covering some roads in the region and delaying some New York City-area train service, CNN affiliate WUSA reported.

Bob Bonenberger found himself cut off at every pass Wednesday trying to get to his Skippack, Pennsylvania, home.

Fears concerning a dam in Laurel, Maryland, receded on Thursday. City authorities lifted their evacuation order after the Washington Suburban Sanitary Commission said it had stabilized the situation, lowered the flow of water and determined the dam is sound.

Residents from an apartment complex, a senior center and a hotel had been moved to a community center after the commission opened the dam’s gates to relieve pressure, causing some flooding.

In coastal Alabama and Florida, residents continued to struggle with the aftermath of flooding that washed out roads, chewed up parts of some buildings and caused at least $100 million in damage in Pensacola, Florida, alone, according to the city’s mayor.

A 67-year-old woman drowned after she was swept into a drainage ditch in Escambia County, a county spokeswoman said.

Mayor Ashton Hayward described the damage on one street overrun by retention ponds near the city airport.

“It was an old riverbed, you know, over 100 years ago, so the water just completely blew out,” he told CNN’s “New Day.”

“The asphalt blew out, the sewer blew out, the gas blew out. It devastated homes right there. It was really almost — it was surreal,” he said.

Pictures from Thursday posted to Facebook by the Walton County Sheriff’s office showed roads turned into waterfalls, cars sitting abandoned and half-submerged in front of tourist condominiums, and damaged buildings.

“Obviously we’re prepared for hurricanes but when you talk about flooding, Pensacola has never had this kind of flooding,” Ashton said.

Pensacola got an estimated 20.47 inches of rain over the two days of the storm, the National Weather Service said Thursday. On Tuesday alone, at the airport in Pensacola, an estimated 15.55 inches of rain fell — the largest amount in a single calendar day since officials started keeping track in 1879, the weather service said.

The area around Orange Beach, Alabama, got even more — a staggering 22 inches to 26 inches in less than 24 hours, the agency said.

Water rushed in so fast that residents climbed on top of furniture and waited on rooftops to be rescued, said Reggie Chitwood, deputy director of emergency management in Baldwin County.

“The waters rose at a historical level. … People had to scramble,” Chitwood said.

CNN iReporter Randy Hamilton described the scene Thursday as similar to that of the aftermath of a hurricane, with “abandoned and flooded cars just littering the streets.”

“Debris from trees everywhere. Standing water all around, gray skies, and wind gusts that make you fear something will blow down on you,” he said.

There was one drowning death tied to the flooding, Florida officials said. The victim, a 67-year-old woman, drove or was swept into a drainage ditch Tuesday night, Escambia County spokeswoman Kathleen Castro said.

‘People have lost everything’

“It’s unbelievable the amount of flooding we’ve had. We’ve have roads torn up, water clear through homes. I went to one home where the foundation was gone. … You saw cars just thrown down a road, pushed down upside down,” Scott said.

“People have lost everything, and they didn’t buy flood insurance because they didn’t think they were in a flood area,” he said.

The storms were part of the same system that has spawned tornadoes and other severe storms since Sunday, claiming at least 38 lives in Oklahoma, Iowa, Arkansas, Mississippi, Alabama, Tennessee and Florida.

In addition to the Florida flooding death, police in Athens, Georgia, said a driver was killed Wednesday when storm winds toppled a tree onto a car.

Authorities in Mississippi confirmed another death from storms that struck Monday.

Officials revealed new details Wednesday about the powerful tornado that struck the Arkansas towns of Mayflower and Vilonia.

The twister was rated an EF-4 on the Enhanced Fujita Tornado Damage scale, with an estimated peak wind speed between 180 and 190 mph, the National Weather Service said. It was on the ground for 41.3 miles on Sunday and was responsible for 15 deaths, officials said.