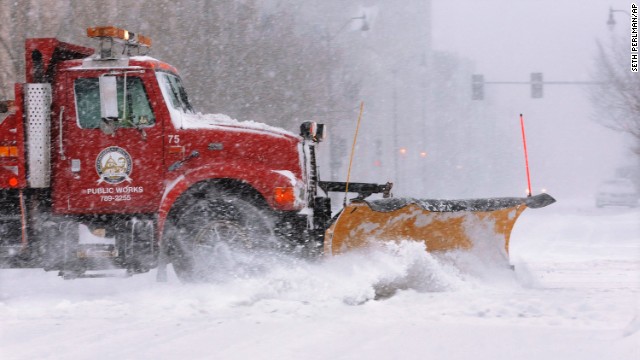 As many as 140 million Americans are bracing this week for a polar blast that’s barreling across the country, dumping snow in some places and shattering records.

Much of the United States will see the coldest temperatures in almost 20 years, according to the National Weather Service. They are expected to be 30 to 50 degrees below average in some cities.

To put things in perspective, the weather in Atlanta and Nashville, Tennessee, on Monday will be colder than in Anchorage, Alaska. By Wednesday, nearly half the nation will shudder in temperatures of zero or lower, forecasters said.

The unusual weather is already causing headaches, especially for travelers.

Close to 3,000 flights were canceled Sunday, said the flight-tracking website flightaware.com, which tracks cancellations due to weather, mechanical and other problems.

A man at Logan International Airport in Boston told CNN affiliate WCVB that he will miss two days of a cruise because he can’t get to Florida as planned to meet the boat.

Another passenger at Logan was overcome with emotion as she spoke, her voice cracking under the stress.

Here’s a look at what’s happening around the country:

Snow was falling across the Midwest. In Brownsburg, Indiana, more than 4 inches had fallen during the morning, said iReporter Bill Byrd.

“Most people are staying in their homes, and church services are canceled,” he told CNN.

“It’s not just a snow event, it’s a cold event, and that’s what scares us,” he said.

Parents should keep an eye on their kids who might be out sledding into the evening hours — there is no school Monday — and check to make sure they don’t get frostbite.

In Wisconsin, a sold-out crowd more than 70,000 hardcore Green Bay Packers endured temperatures between 4 and 8 degrees. With the wind, the air could have felt as cold as minus 15 degrees.

“You can prepare for it, but you can’t really prepare for it. We’ve been doing this our whole life up here. It’s what Green Bay is all about — it’s cold weather and hard-hitting football,” said Jason Gibbs.

In Embarrass, Minnesota, residents wondered whether they might see their record-cold temperature of 64 below zero, set in 1996, snap like an icicle.

“I’ve got a thermometer from the weather service that goes to 100 below,” resident Roland Fowler told CNN affiliate KQDS. “If it gets that cold, I don’t want to be here.”

Because of conditions in the Windy City, officials said Chicago Public Schools will be closed Monday.

The city had 12 centers for residents to seek warmth, one of which was to stay open all night through Tuesday. Libraries and some other city facilities would also be open, said Evelyn Diaz, the city’s commissioner of the Department of Family and Support Services. Illinois Gov. Pat Quinn said 100 warming centers were open statewide.

In St. Louis, authorities used a reverse 911 system to call people who might need assistance. More than 80 didn’t answer, Mayor Francis Slay said, so police were going to check on them.

Slay also said that the city would close on Monday except for emergency personnel.

“We expect this to be a three-day event,” he said, adding that 80 snowplows would be used to keep primary roads passable.

The arctic blast threatens to sweep subzero lows as far south as Alabama and plunge much of the Deep South into the single digits.

Freezing rain is also possible along the Appalachians all the way up to New England over the next couple of days, the National Weather Service said.

The low temperatures and wind chill are a dangerous recipe for rapid frostbite or hypothermia.

“Exposed flesh can freeze in as little as five minutes with wind chills colder than 50 below,” the National Weather Service’s Twin Cities office in Minnesota said.

Over the past week, at least 13 people have died from weather-related conditions.

Eleven people died in road accidents — including one man crushed as he was moving street salt with a forklift.

One man in Wisconsin died of hypothermia. And an elderly woman with Alzheimer’s disease in New York state wandered away from her home and was found dead in the snow in a wooded area about 100 yards away.

Port Authority spokesman Ron Marsico said the plane, carrying 32 passengers, skidded into a snow bank while turning onto a taxiway after landing safely. No injuries were reported. The aircraft was towed to the gate, the Federal Aviation Administration said.

Flight operations were suspended for about two hours.

As snow fell in Missouri, Interstate 44 in Webster County was closed because of an accident involving multiple tractor-trailers, according to the state’s Department of Transportation website. The highway was also closed in Greene County when a semi crashed as it headed west.

The bad weather was headed east.

This, too, shall pass

If there’s any good news about the biting cold snap, it’s that much of it should be over for the Midwest by Wednesday, the National Weather Service said.

In the meantime, those in the western part of the country can skip all the fuss. Most of the West can expect relatively pleasant weather through Monday.

A friend of mine lives in Illinois and she’s said it’s never been that cold there and years since snow like that.

It’s really quite astounding and they’re not even half way through winter. If it’s anything like NZ – the coldest part of winter would be yet to come? Fingers crossed it’s just an “anomaly”…