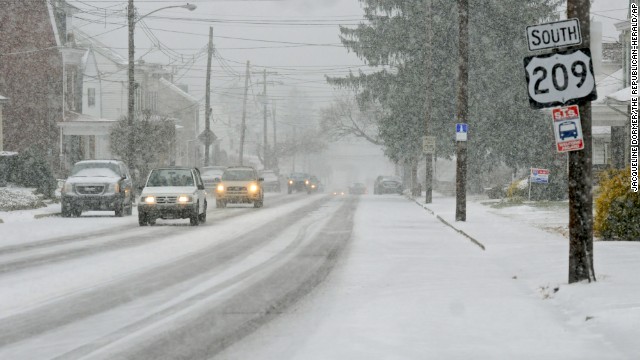 Mounds of snow are piled throughout New York and New England after a blustery storm swept through, leaving behind more than a foot of snow in some areas.

Albany, New York, got at least 12 inches, said one iReporter.

“We usually get these big snow storms in January and the snow on the ground usually stays until springtime since it’s always cold here in Albany,” Zeynep Rice said. “Last year was a bit weak in snow until end of February actually. So we’re happy to have a solid snow covering on the ground earlier than usual this season.”

The storm spared major metropolitan areas like Boston and New York, but some areas in Maine and along the U.S.-Canada border saw significant snow, the National Weather Service said.

The Maine cities of Biddeford (16.5 inches total) and Kennebunkport (14 inches) topped the list, while Exeter, New Hampshire, received 13.5 inches of snow over the weekend.

The good news for New Englanders and New Yorkers was that the storm quickly moved out of the Northeast.

Ocampo told CNN she’s braced for more snow and a colder Christmas than last year. “We can’t do anything about the weather,” she said. “Just bundle up, warm up with hot coffee, cocoa or tea and stay positive.”

By Sunday afternoon, 350 flights into, out of, or within the United States were canceled, according to flightaware.com.

Highway traffic may be treacherous, with the problem compounded by high winds. CNN affiliate WCVB-TVreported that Massachusetts expects to use 10,000 tons of salt and 2,000 vehicles during the storm.

Frank DePaola of the Massachusetts Department of Transportation told CNN that speed limits on major roads had been lowered to 45 mph.

Those snowed in might watch the New England Patriots on TV — they’re in sunny Miami, facing the Dolphins on Sunday.

The eastward-moving storm dropped snow earlier across the Midwest and western Pennsylvania, with 9 inches reported in Urbana, Illinois.

Millions of people are experiencing the big chill as the system dropped snow along a swath more than 1,000 miles long.

Chicago has already been hit hard. The snow that fell Saturday afternoon was wet, making it heavy and difficult to shovel.