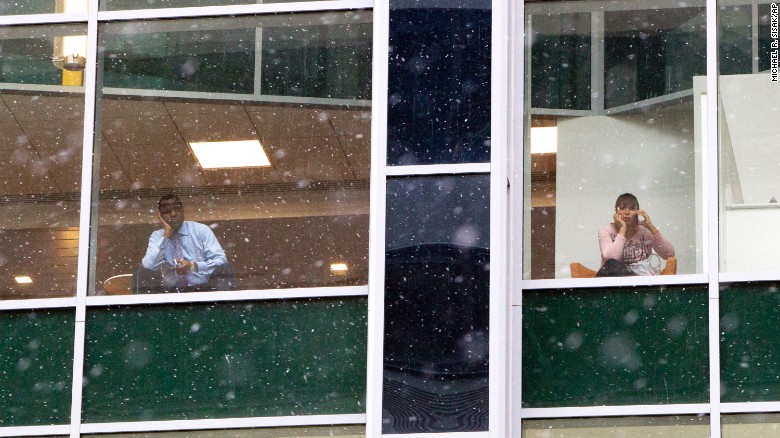 While sparing much of New York and New Jersey, the much talked-about storm managed to wallop parts of New England on Tuesday. And even after producing coastal flooding and dropping several feet of snow (including 30 inches in Framingham, Massachusetts, and up to 6-foot drifts statewide), there’s more to come.

“We fully expect that there are parts of eastern and central Massachusetts where people may get … another 5 to 10 inches of snow,” Gov. Charlie Baker said around midday. “… And there are areas around eastern Massachusetts, at this point, that you would probably describe as being in a whiteout-type condition.”

Massachusetts wasn’t the only state getting hit hard Tuesday afternoon. The National Weather Service has also reported about 16 inches of snow in Portland, Maine; over 21 inches in Hudson, New Hampshire; and 28Â½ inches in Orient on New York’s Long Island.

It’s not just the snow. East-facing coastal areas — already coping with early morning flooding, heavy snow and potent winds — are bracing for a new high tide and the storm surge expected with it around 5 p.m.

Nantucket and its 15,000 residents “lost power to the entire island,” said police Chief William Pittman, a situation he attributed to sustained winds of roughly 50 mph, punctuated by gusts of around 80 mph. National Grid had restored electricity, using generators, to most of them by noon, state emergency management director Kurt Schwartz said, though a more permanent solution was still probably a days away.

On Massachusetts’ South Shore, the ocean roared inland to flood the Brant Rock Esplanade lined with homes and businesses. The town’s police posted a photo of what it called a “major seawall breach (that) caused structural damage” to an unoccupied home, while authorities in neighboring Duxbury showed a deck blown yards away from a home. And not far away in Scituate, slushy ice, seawater and debris clogged streets.

“And they’re talking about another wave (of snow),” said Jim Cantwell, a state representative for both Marshfield and Scituate.

On the northern edge of the storm in Maine, Rockland resident Steve DePasa said at 1 p.m. that up to 15 inches of snow was already on the ground, and “we’re expected to get close to another 10 inches.” So what can you do in the meantime, besides pray that the power stays on?

“It’s just go out and clean up a little bit so you can,” said DePasa, a CNN iReporter. “Then wait a few hours and do it again.”

The good news? Most people seemed to have heeded the warnings about the storm, which was forecast as “crippling” and “potentially historic,” by stocking up and staying off the roads. If you go through this every year, after all, there’s a good chance you’ll know the drill.

“During these storms, everybody has to hunker down and just be safe,” said Bob Connors from Plum Island, on Massachusetts’ North Shore. “We’ve become pretty proficient at that.”

While residents of Rhode Island and Massachusetts battled Tuesday’s storm, others in the Northeast — like New York and New Jersey — were breathing a sigh of relief.

Compare that with a day earlier, when they’d be more likely to be hyperventilating, given the all but cataclysmic warnings about the coming storm.

They were told it could turn 58 million people’s lives upside down. Seven states, from New Jersey to New Hampshire, declared states of emergency. School was called off for not just Tuesday but Wednesday as well. Public transit shut down. Businesses closed, suggesting a far-reaching economic impact in one of America’s busiest commercial regions.

Yet by mid-morning, snow wasn’t even falling in New York City. By then, travel bans in New Jersey and New York — even places like Long Island’s Islip, which got more than 20 inches of snow — had been lifted, as some restrictions remained in effect in neighboring Connecticut.

“We’ve dodged the bullet,” he told CNN. “This is nothing like we feared it would be.”