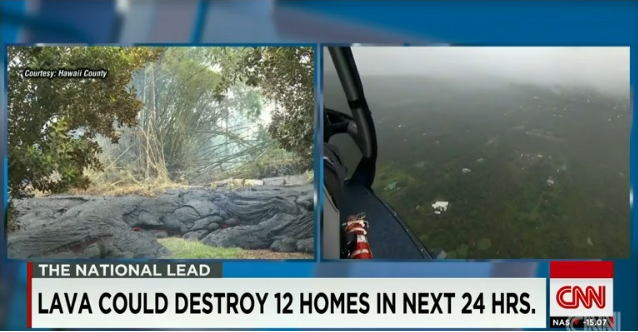 The thick, fiery stream of lava oozing over eastern Hawaii is about to cross Pahoa’s main street and could soon envelop over a dozen homes.

The slow-moving stream has been inching along at about 30 feet per hour, said Darryl Oliveira, director of the Hawaii County Civil Defense.

Late Wednesday, the nearest home was about 100 feet away from the liquid inferno. But due to shifts in the lava’s speed, it’s difficult to predict when the first house would be swallowed.

About 20 families in the path of the lava have been told to evacuate, Oliveira said Wednesday.

The main road in Pahoa, on Hawaii’s Big Island, will be overcome with lava by Friday morning. While the front of the lava flow is 15 feet wide, the molten river widens significantly behind it, the U.S. Geological Survey said.

“As it moves across soil, you can hear and smell the fire,” said Troy Scott of the Hawaii County Civil Defense Agency. “It is incredibly hot … the heat is very strong.”

Scott said residents who want to see the lava move over the community would be taken to a safe distance “to allow them to have their closure.”

“We’re going to be very sensitive to the fact that they’ll be losing their home, and this would be a catastrophic event,” Scott said.

The slow-moving lava flow began moving toward Pahoa in June, when a volcanic crater vented and released the river of liquid rock.

And it could go much longer. A USGS geologist said the lava flow could continue for 30 years.