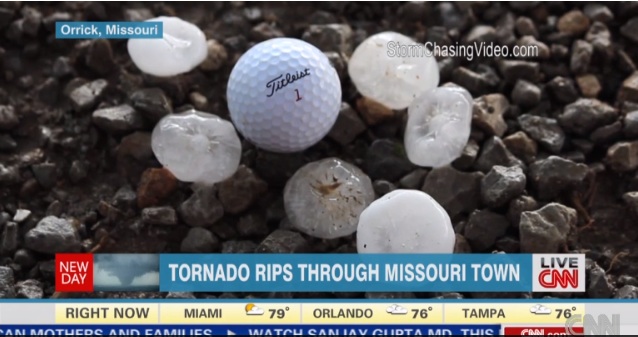 Tornado-spawning storms that tore through parts of Missouri, Kansas and Nebraska over the weekend will move across the central United States on Monday.

The National Weather Service said severe weather and flooding will be possible from the central Plains to the Great Lakes region. Colder air will continue to bring heavy snow across portions of the Rockies.

On Monday, there’s a 50-60% chance of thunderstorms in Omaha, Nebraska, and Kansas City, Missouri, the weather service said. Clear weather is forecast for Tuesday.

Though the storms in the Plains bypassed the cities, residents of rural areas began cleaning up after twisters wreaked havoc. No deaths or serious injuries were reported.

In Sutton, Nebraska, at least one tornado touched down Sunday. Loren H. Uden, Emergency Management Coordinator for Clay County, told CNN a police officer was hurt when high winds blew the windows out of a cruiser. Ten grain bins were damaged and roofs were blown off eight businesses.

At least one farm was wrecked.

“I guess it just lifted up the house and slammed it back down, because it’s just in a pile of rubble right now,” said McKenzie Griess, whose car was crushed by a tree in the severe weather.

“This was my cousin’s house. He and his wife lived there with their two kids. They weren’t home. They got out in time. They went to my aunt’s house a couple of miles away. It’s freaky to see,” she said.

In Orrick, Missouri, outside of Kansas City, a twister damaged 200-300 homes in the town of about 900 people, reported CNN affiliate KCTV.

The local high school was damaged so badly that graduation next Sunday will have to be held in a neighboring school, KCTV reported.

“It has been tough,” resident Lana Ryan told the affiliate. “We’ve all kind of been in shock when this happens.”

Residents said the last tornado hit Orrick back in 1967.

“Orrick has been blessed for many years, so I guess it was our turn,” Ryan said.

The storms downed trees, caused high water and knocked out power in Omaha and its outskirts.

“You could just see a wall fo water coming down the street. I kind of told my wife we’ll go hide in our little area,” Robert Walko of Elkhorn told CNN affiliate WOWT,

Behind the severe weather affecting the Plains, meteorologists are keeping a watchful eye on a snowstorm in the Rockies. Winter storm warnings and advisories have been issued for parts of Utah, Colorado, southern Wyoming and western Nebraska.

Higher mountain elevations could see 1 to 2 feet of snow, with isolated pockets of up to 3 feet. Denver could get up to 5 to 10 inches of snow.

Although snow might seem unusual this time of year, it’s actually not record-setting for the Mile High City. Denver received an inch of snow on May 11, 2011, and even recorded snow as late as June 12 in 1974.

The Southwest won’t escape this wild weather either.

Very strong, damaging winds will blow into parts of southern California, Nevada, Arizona and New Mexico with gusts up to 50 to 60 mph. Dry conditions mixed with gusty winds will enhance the fire threat.