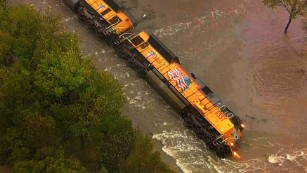 The math is simple, but the potential weather consequences are daunting.

Up to 20 inches (51cm) of rain have fallen over parts of Texas over the last few days, breaking some local rain records. In southeast Texas, another 6 to 12 inches (15-30cm) were on their way overnight — even more in isolated spots.

Rain should continue through part of the week.

Add coastal high winds that are driving in high waters on Sunday, and it all equals flood warnings of almost every type from the National Weather Service from Corpus Christi up the Gulf Coast to Morgan City, Louisiana:

Rivers and creeks were predicted to overflow in Corpus Christi, in Waco and near San Antonio, Texas, and in Lake Charles, Louisiana.

Coastal flooding was predicted to push inland from Beaumont east throughout much of the Louisiana coast.

Galveston County is predicted to become inundated on two fronts — up to a foot of rain is in the forecast, and at the same time tides pushed by howling winds are projected to rise up to five feet above normal. Residents of Bolivar Peninsula are advised to evacuate, an official said.

When rushing water meets cars and people, danger often results. It only takes 12 inches (30cm) of flowing water to sweep away a small car, the weather service has warned.

“Most flood deaths occur in automobiles. Never drive your vehicle into areas where the water covers the roadway,” it said.

Earlier in the day, flooding washed away cars, and derailed a freight train. Rescuers pulled motorists out of cars stuck in high water.

One person disappeared in San Antonio, a homeless man who tried to rescue his dog from a drainage ditch. He was swept away in pre-dawn hours, a fire official said.

The dog was later found safe. The man hasn’t been.

Dallas was in the thick of it Saturday, getting about eight inches (20cm) of rain in 24 hours. As the Trinity River approached flood stage, a flood gate on nearby White Rock Lake opened to release water and keep it from overflowing.

On roadways in and around Austin, heavy rain prompted the closures of 66 low-water crossings. The city government, via Twitter, urged people to stay inside.