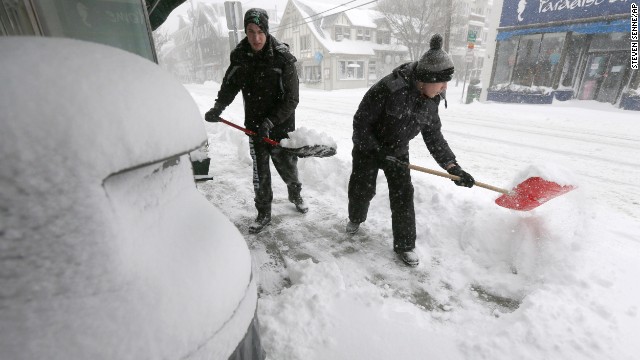 And, try as we might, we couldn’t get any glimmers of hope from the CNN weather department’s forecast for what’s ahead.

The storm system that dumped record-breaking piles of snow — including 18-inch snowdrifts in Plymouth, Massachusetts — is moving off the coast, and remaining blizzard warnings are expiring. But the freezing weather is going to stick around.

“Another clipper will reinforce the cold air already in place, so any snow on the ground is expected to hang around,” CNN meteorologist Indra Petersons said.

And “more surges of cold Arctic air are on tap for next week,” added CNN meteorologist Sean Morris. “New York stays well below freezing for the foreseeable future — possibly holding until the end of the month, though there’s a chance they could briefly rise above 32 degrees Saturday afternoon. Washington, D.C., isn’t expected to rise above freezing until Saturday afternoon, when it will be a balmy 37 degrees. But there’s more cold and snow on the way early next week.”

But through the Midwest, Southeast and Northeast, temperatures were 15 to 25 degrees below average Wednesday.

This blizzard did not follow a typical pattern, Petersons said. The heaviest snowfall was closer to the coast rather than inland, even though the system was moving from west to east. The storm system strengthened off the coast, picking up moisture from the Atlantic to bump up the snowfall.

Staying home and heading out

Rich Schultz, father of three in Fair Lawn, New Jersey, told CNN he was spending the day cooking and planning meals for the week, including shepherd’s pie and tomato, corn and basil soup.

Others have been venturing out.

It was a time for play for some in Philadelphia. With about a foot of snow falling on the city, the steps at the Museum of Art became a sledding hill.

On Facebook, dozens of people told CNN about the silver linings they’ve been finding in the storm. It “makes you very grateful” for the “wealth you have” in taking care of “basic human needs,” Sue Skoo wrote.

Out West, at least one Utah resident didn’t understand what all the fuss was about.

“A storm brings 10″ of snow to Utah and we throw a party,” Drew Stoddard, who lives south of Salt Lake City, posted on Twitter. “It happens in New York and they declare a state of emergency.”

Around the Northeast, some schools and offices were closed, and some roads were shut down.

More than 1,400 flights were canceled, according to FlightAware.com.

Susan Otterstrom found out Tuesday that she had two more days in the Big Apple, instead of returning to Illinois.

“I got a call that (my flight) was canceled, and I couldn’t reschedule until Thursday,” she told CNN affiliate WPIX.

Another traveler said she was resigned to living the concourse life until she could catch a flight out.

“I’m just going to stay here and work and doze and whatever,” she said. “You do what you have to do.”

Amtrak was running a modified schedule on the Northeast Corridor, saying passengers should expect some delays and fewer trains between Washington and Boston.

“Nobody was outside on the streets and no cars were driving,” New York City resident Jodi Kaplan said. “Everyone and everything was so quiet. It was as if NYC welcomed this weather and the chance to stop. And be frozen.”

unreal how bad there winter has been this season. Hope it does the same for us this winter. What do you think of our chances of alot of snow like the U.S and Canada WW Team??

Hi there – one thing the climate change scientists are saying is that as the world warms, even a small amount like a degree or two, it increases the chances of severe weather all year round – more droughts, more floods, more snow.  In NZ it’s far more complicated – we aren’t affected by global conditions in the same way as big continents are, our weather is on a far more local scale caused by the placement of highs and lows around Australia and Antarctica.  This is why it’s hard to predict long term in NZ, we’re two small islands in the roaring 40s. At this stage, if the pattern we have continues into winter, snow totals could be high (as we’re getting snow on the ranges of Southland each week at the moment and it’s January!)