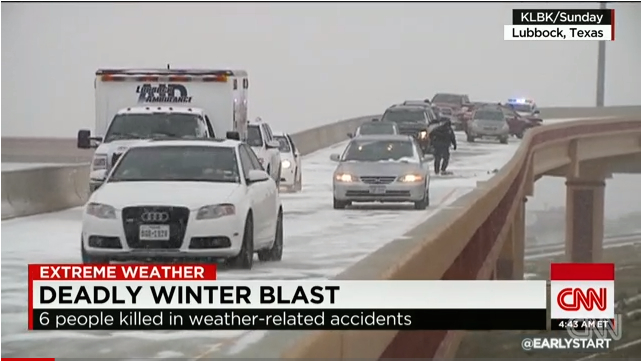 That freeze blast last week — it got refueled with another round of arctic air.

And it’s creeping toward the Northeast and down to the Deep South, northern Texas, and the desert Southwest, the National Weather Service says.

It will get at least as cold this week in Memphis, Tennessee — which should see a low of 11 degrees Fahrenheit (-11c) overnight Monday — as in Albany, New York, where the low will hit 16 (-8c) the next night.

Single digits are striking this week as far south as Tupelo, Mississippi — 9 degrees (-13c) overnight Monday. And low temperatures in the teens litter a large part of the country’s weather map on a few nights.

Daytime highs won’t bring much relief, not even in the Southeast, where they should be 25-30 degrees below normal, the weather service said.

The front is expected to lay down snow from parts of Kentucky through New York State, and freezing rain from Tennessee to the lower Midwest and parts of Maine.

Some places in the Plains, Midwest and Great Lakes could see 4-6 inches (10-15cm) of snow, CNN meteorologists said. The western side of Michigan could get up to 8 inches (20cm).

But this blast won’t be the snow maker the last one was.

The freeze should let up before the end of the week for the southern parts of the country, but not for most of the rest.

By Wednesday, most of the eastern two thirds of the country will rebound to only 15 degrees below the seasonal average.

If you’re in Southern California, it will feel like you live in a parallel universe to the rest of the country. Conditions will be ripe for wildfires.

Highs in the 70s, perhaps up to 80 degrees (26c), and dry, gusty winds are behind it. They will sap the air of moisture, and if a spark ignites, they could push the flames across the landscape.

It has also asked that residents not mow dry grass, pull a vehicle over onto it, toss cigarette butts on it — and not to target shoot in undesignated areas, especially not at metal targets, which could make sparks fly.