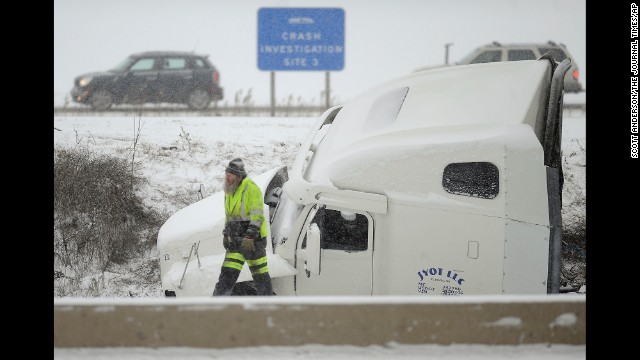 Rescuers located two adults and four children Tuesday who had gone missing two days earlier after they ventured to play in the snow in a mountainous area in northwest Nevada, authorities said.

The group was found safe in an area called Trinity Canyon and were in fairly good condition, according to the Pershing County Sheriff’s Office. They were discovered from a distance by ground-search crews using binoculars, the sheriff’s office said.

The announcement came about midday Tuesday as more than 200 people scoured a vast frozen range of Nevada spanning 6,000 square miles. The group went missing in their Jeep on Sunday, authorities said.

The disappearance of a man with his two children and a woman with her niece and nephew was among the most dramatic developments in the Arctic-like weather shocking much of the Lower 48 states.

Officials in Nevada remained undaunted despite the fact they no longer received pings off the cell phone of the missing persons, said Sheila Reitz of Pershing County Sheriff’s Office.

On Monday, authorities had been encouraged when they were able to receive a couple of pings from the phone of James Glanton, 34, officials said. Cell service is spotty because the area is so remote.

Also rescued were Glanton’s two children and Christina MacIntee, 25, along with her niece and nephew. The children range from 3 to 10 years old, the sheriff’s office said. They all set out to play in the snow in the Seven Troughs mountain range Sunday.

A massive search for them involved vehicles, planes and helicopters, Reitz said.

Before the group was found, worries ran high as thermometers plunged below zero overnight.

“The temperatures out here are very cold, and we’d like to bring a successful end to this,” Sheriff Richard Machado said on a snow-packed country road. “We’d like to find them, just as soon as we can.”

Amanda Fitzpatrick, mother of 10-year-old Shelby Fitzpatrick, one of the missing children, had also joined the search in the bitter cold.

“It’s been extremely hard, probably the hardest 24 to 36 hours of my life,” she earlier told CNN’s Piers Morgan. “It’s my baby girl.”

The pre-winter wintry weather isn’t over. Temperatures in storm-stricken parts of the country are expected to stay about 10 to 20 degrees below normal for the rest of the week, the National Weather Service said.

Federal offices in Washington were closed Tuesday as more sleet, snow and freezing rain were expected. And a swath of 2 to 6 inches of snow was expected to fall Tuesday from Virginia to the New England coast, forecasters said.

Philadelphia can expect to get 3 to 5 inches of snow on Tuesday; New York, a little less than that.

The storm will finally leave the East Coast late Tuesday, but the mercury won’t rise above freezing until at least Friday, the National Weather Service said.

Portland, Oregon, and Chicago will see snow and freezing rain this week.

Even St. Louis has been colder than Anchorage, Alaska.

At least the nation’s airports are getting back to normal. The website Flightaware.com says more than 1,300 flights have been canceled for Tuesday. That’s down from the 1,900 flights canceled Monday and 2,800 Sunday.

But road conditions have been treacherous. At least 15 people have died from weather-related incidents in the past several days, mostly in traffic crashes. Eight died in Oklahoma alone, state officials said.

The hazardous conditions in northern Nevada had many concerned about the missing children and adults before they were found.

“If there’s one thing you should learn from the lessons of these people, never let your tank below a half a tank (of gas) in the winter,” CNN meteorologist Chad Myers said. “You might need that for the electricity, for the power, for the heat in that car.”