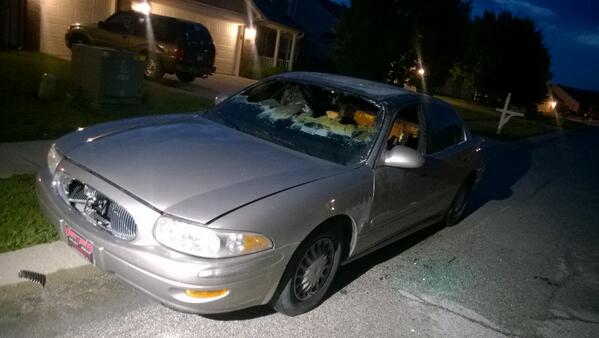 As Hoosiers, Indianapolis dealt with lightning during the overnight hours into Thursday morning, the National Weather Serviceâ€™s reminders on how to safely deal with natureâ€™s strikes come to the forefront.

A bolt of lightning struck a car on the 7200 block of Fields Way on the southeast side of Indianapolis early Thursday, the owner told FOX59 News.

The ownerâ€™s father used a fire extinguisher to put out the initial small fire, but the car was gutted and totaled when flames sparked back up and lit the carâ€™s electrical system.

The 20-year-old owner, who preferred we did not report his name, just finished basic training with the National Guard last month and was using the car to drive to job interviews.  He planned on contacting his insurance company at some point on Thursday to begin the claim process.

According to the National Weather Service, no place outside is safe when thunderstorms are in the area because if you hear thunder, lightning is close enough to strike you.

NWS describes a safe shelter as a â€œsubstantial building with electricity or plumbing or an enclosed, metal-topped vehicle with windows up.â€

The service advises moving to safe shelter immediately when you hear thunder and remaining there at least 30 minutes after you last hear the sound of thunder.

When inside, the National Weather Service believes it is best to stay off corded phones and electronics, while also staying away from plumbing fixtures, windows, doors and porches.