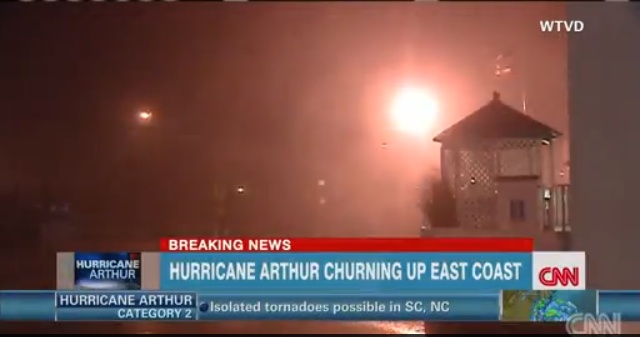 Hurricane Arthur — or what’s left of it — has rained on many an Independence Day parade, if they weren’t canceled ahead of time.

But what the first named storm of this hurricane season hasn’t done, it appears, is cause significant damage.

As of 8 p.m. ET, Arthur was churning deep into the Atlantic Ocean about 150 miles south-southeast of the Cape Cod town of Chatham, according to the National Hurricane Center.

Yes, it is still a hurricane with sustained winds of 80 mph. And, yes, Nantucket and all of Cape Cod face tropical storm warnings.

Thankfully, Arthur wasn’t expected to live up to dire predictions for the East Coast.

The center of Arthur is forecast to pass over or near western Nova Scotia early Saturday. By then, the system should be no more than a “post-tropical cyclone” — meaning it will feature rain and little else.

While the wind won’t pack as much wallop for the Northeast, that doesn’t mean Arthur didn’t have an impact — especially on those who wanted to both go outside and stay dry over the holiday.

Americans from New York City to far northeast Maine are experiencing, or could soon experience, drenching rains tied to the outskirts of the Category 1 storm. This is after a number of moves, such as the hasty rescheduling of Boston’s Independence Day celebration one day early, done ahead of the storm.

The good news is that Arthur isn’t the type of holiday guest that’s hanging around long.

The Miami-based hurricane center noted that the storm was speeding along to the northeast — meaning it is heading farther out to sea — at a 28-mph clip. That is motoring along by hurricane standards, especially for one that was stalled in the Atlantic just a few days ago.

Arthur nonetheless managed to dampen some spirits as it raced along. On Friday afternoon, for instance, southeast Massachusetts got lashed by round after round of pounding rains that left some roads covered with water.

“Arthur does not like us right now,” a soaked but smiling Adam Morales of Fairhaven told CNN affiliate WCVB. “I don’t know (how) we disappointed him, but it’s OK. I don’t mind it.”

The state that was supposed to bear the brunt of Arthur’s wrath was North Carolina.

It did indeed get hit, though it was more a glancing blow than a knockout punch.

But not everyone knew that would be the case at 11:15 p.m. Thursday, when Arthur roared ashore between Cape Lookout and Beaufort with 100-mph winds.

Robin Nelson’s house in Newport — right across the Newport River Sound from Beaufort, and in the path of the eye wall — clattered and rumbled. In the distance, she heard the whirring hum of storm gusts and snapping of tree limbs.

“It’s howling pretty good here,” she said late Thursday. “You can hear it coming across the sound.”

Around 9:30 a.m. Friday, Gov. Pat McCrory said that 44,000 people in his state were without power due to the storm. A CNN tabulation around this time found about 18,500 customers, which could translate to households or businesses, without electricity.

Utility companies were able to make significant inroads in getting people’s lights back on as the day wore on. By 2:30 p.m., there were around 5,000 customers without power in the state.

Later in the afternoon, McCrory followed up by noting that Arthur had “minimal impact” on coastal communities — with one plus being that it moved out in time for the holiday and the upcoming weekend. The Outer Banks forecast called for sunny skies and high temperatures in the 80s.

Brad Doerr knows it could have been a lot worse, even with one window lost and water up to the door of the Dairy Queen restaurant in Avon that he runs.

“Emily blew a lot harder than this one,” Doerr told CNN affiliate WAVY, referring to 1993’s far more powerful Hurricane Emily. “This one we were really fortunate.”

Though it has moved on, the hurricane leaves deadly danger lurking under its coattails: Possible rip currents. The weather service calls the spurts of back-flowing water — that can drag a swimmer from the shore and out to sea — the worst danger at the beach.

In 2009, tropical storms killed six people. All of them drowned in high waves or rip currents, the National Weather Service said. And it doesn’t matter, if the storm has already passed — it can sprout them from long distances.

They’re hard to see and snatch bathers without warning.

Sherman Lee Criner is an iron man triathlete and confident he could swim out of a rip current, if he had to.

Criner was vacationing in Arthur’s bull’s eye on Emerald Isle with his son, daughter and niece.

He didn’t plan for the group to be in the storm’s path. He asked his two children and niece where they wanted to spend the holidays; they voted for the beach, and he granted the wish.

He thought of canceling the trip as the storm brewed but decided against it. “It’s a doable storm,” Criner said.