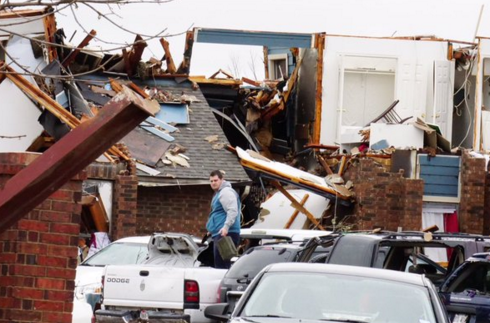 A mammoth storm system engulfing much of the United States has claimed 24 lives, including four soldiers in Missouri. And it’s not over yet.

The rash of severe weather has spawned deadly tornadoes in Texas, intense flooding in the Midwest and blizzard conditions in New Mexico.

“The storm system will gradually pull away by Tuesday, but flooding and treacherous travel could (linger) into midweek,” the National Weather Service said.

There have been about 43 weather-related deaths in the past week across the country, with the current storm severe storm system blamed for 24.

The 24 deaths include 11 in the Dallas area, eight in Missouri and five in southern Illinois.

The high today was 74 and the low is 34. Thanks, Texas! Here’s some hail for your viewing pleasure. pic.twitter.com/W0MrFfE2OC

The death toll may increase by two, as two bodies were recovered Monday in Gordon County, Georgia. Chief Deputy Sheriff Robert Paris said one victim was found in a submerged vehicle, and the second incident appeared to involve a boat.

The first death is almost certainly related to flooding, but the second is still under investigation, he said. The county has witnessed widespread flooding this week.

Some residents finally able to take a first look at their homes after Saturday’s EF4 in Garland, TX pic.twitter.com/SAEbUOv1cv

Here’s what to expect across the country, including areas already hit hard by the storm:

Intense rain and flooding are expected across much of the state Monday, along with snow and freezing rain in the northern part of Missouri.

A witness reported the soldiers’ car driving onto a flooded road and immediately getting swept downstream, the Pulaski County Sheriff’s Office said.

Authorities found their car several hundred yards from the road, entangled in some brush, the sheriff’s department said.

Two soldiers found in the car Saturday night had drowned. The bodies of the other two soldiers were found Sunday morning.

“The possibility of a fifth occupant of the car exists, since an acquaintance of the above men is still missing,” the sheriff’s office said.

The names and nationalities of the four soldiers have not been released.

Two other people in Pulaski County also drowned when their car drove onto a flooded road and was also swept several hundred yards away, authorities said.

“Streams turn into rivers, and people sometimes don’t see the road has flooded over when they are driving at night,” he said.

Dallas-area residents trying to recover from a spate of deadly tornadoes will get hit with snow and near-freezing temperatures Monday.

The area is already grappling with the effects of several tornadoes, including a twister in Garland that killed eight people.

Cars that had been in driveways ended up inside homes. At least one car flipped and landed upside down near a highway overpass.

In Garland, Terri Sykora and her partner, Ronnell Lincoln, were among families of an apartment complex granted access to their homes Monday for the first time since the storm hit the complex.

There were no sirens to warn of the coming twister, Sykora said.

“It got real quiet,” she recalled. Her partner “went out and said ‘tornado,’ and we all went to the bathroom.”

The couple and their three children hid in the bathroom.

On Monday, Sykora reflected on what the family lost.

“I feel so bad for my kids because everything they were so excited for (at Christmas) is gone now,” she said.

But material things can be bought again.

It’s the sentimental things, the memories, that are irreplaceable, she said.

Other tornadoes touched down in nearby Collin and Rockwall counties. At least three people were killed by the storm in Collin County, the sheriff’s office said.

David Green walked by the highway Monday, carrying some clothes on hangers. It was his first of several trips to salvage items from his home.

Green said that during the height of the storm he saw both terror and love — destruction, followed by neighbors helping each other out.

“You take your worst fears, and you roll them up into one big ball, and you take your best feelings and put them in a ball, and combine them, that’s what you come out with,” he said.