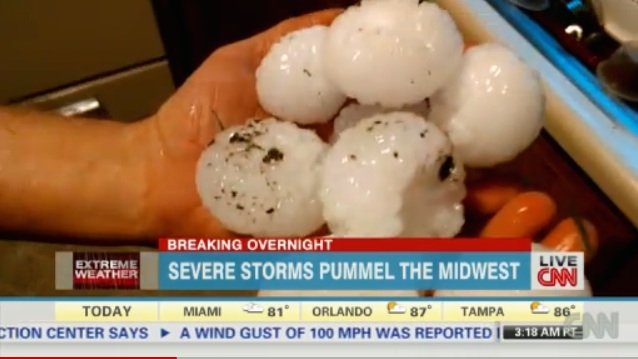 Severe storms that pelted the Omaha, Nebraska, area with hail are expected to move east Wednesday and hit parts of the Ohio and Tennessee valleys, CNN meteorologist Sherri Pugh said.

Nashville; Louisville, Kentucky; and Cincinnati probably will be pounded with heavy rain and strong winds Wednesday night, the National Weather Service said, with the chance of precipitation at 70% to 80%.

Isolated tornadoes and flash floods are possible, Pugh said, though the threat is lower than it was Tuesday.

But the hail was what got everybody’s attention in Nebraska, pummeling 4,300 vehicles at Woodhouse Auto Family in Blair, about 30 miles from Omaha. Hoods were dented and windshields were shattered, CNN affiliate KMTV reported. Company officials Wednesday estimated damages at $162 million.

“The damage is substantial,” Woodhouse Chief Financial Officer Paul Cech said. “We’ll get people all over the country calling us trying to get discount prices.”

That’s exactly what happened the last time the Omaha company’s cars got battered in a storm. As soon as the hail subsides, a flood of callers try to get their hands on banged-up vehicles.

Some of the hail was baseball-size and smashed windows and damaged siding on houses, KMTV reported. Police in Blair said 20 people were taken to the hospital with injuries, CNN affiliate KETV reported. In several other cities, streets flooded and trees were knocked down.

By Wednesday, officials had received at least 12 reports of possible tornadoes in Nebraska, Iowa, Wyoming and Kansas, the Storm Prediction Center said.

More storms in the Midwest

On Wednesday, southern Illinois, Indiana, Ohio, Kentucky and West Virginia are under the gun.

Just across the Missouri River, the storm ripped off the roof of a hotel in Missouri Valley, Iowa, KETV said.

And a wind gust of 100 mph was reported in Ringgold County, Iowa.

Iowa Gov. Terry Branstad issued a storm disaster proclamation Tuesday night for Pottawattamie County, where the storms hit while voters were heading to the polls for primary elections.

Those are huge hail stones.  Would be painful to be be hit with them.