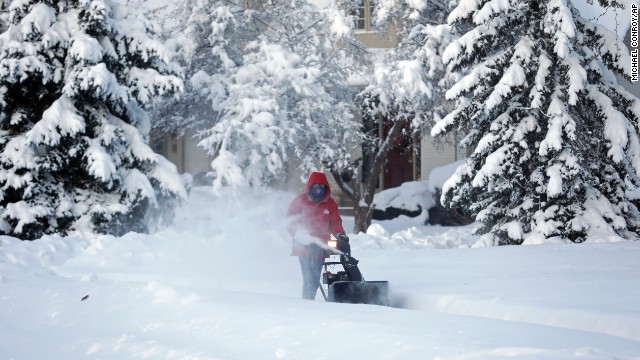 Alright, East Coast and Deep South, it’s your turn to be miserable.

The historic freeze that proved too cold for polar bears in the Midwest is spreading, dropping temperatures in the eastern third of the country about 20 degrees below normal for Tuesday, forecasters said.

Meanwhile, much of the Deep South is frozen solid, with hard freeze warnings in effect Tuesday from eastern Texas to the Florida panhandle.

How cold will it get? In New York, where it was about 50 degrees Fahrenheit (10 degrees Celsius) with wind chill Monday morning, could plunge as low as minus-7 (minus-21 C) on Tuesday — a nearly 60-degree drop in a single day.

Both Atlanta and Washington will shiver in 6-degree weather; Pittsburgh will shudder at 4 degrees F (minus-15 C).

All this thanks to a distorted polar vortex that likely came from Siberia.

The Mendota Police Department received a report from Amtrak around 6 p.m. (7 p.m. ET) about a train stuck about 4 miles west of the city, Sgt. Ken Haun said. Officers tried to reach the train, but couldn’t due to the weather.

As many as three trains may have been stranded in the area, according to passengers who spoke to CNN. Amtrak did not respond to CNN’s requests for comment overnight.

Early Tuesday morning, passenger Sierra Schnack said the train she was riding in had been stuck for more than nine hours.

Schnack said she boarded the train in Quincy, Illinois, and was headed to Chicago when the train got stuck.

She said delays in updates have been frustrating, but employees have been giving out food and water for free.

For the third day this week, more than 1,000 flights have been canceled within, into or out of the United States on Tuesday, according to FlightAware.com.

As of early Tuesday morning, more than 1,600 flights were canceled. And that number is expected to rise.

Among those stranded in the deep freeze was New York resident Mindy Goldberg, whose family’s flight back from Mexico had been diverted to Boston because of bad weather.

“I just called my kids’ school to tell them they wouldn’t be there, and she said, ‘Everyone’s stuck somewhere,'” she told CNN affilliate WBZ.

In Indianapolis, Los Angeles resident Jason Bentley decided to play in the snow outside the airport after learning his flight home had been canceled Sunday. It was 15 below zero (26 below zero C).

“This is the wettest snow I’ve ever touched,” Bentley said. “The easiest snow to make a snowman and to have snowball fights. It’s also probably the worst (weather) I’ve ever been in because of the temperature.”

Not just cold, but deadly

Authorities have blamed at least 15 deaths on the cold so far, including 11 from traffic accidents and two involving hypothermia.

Extreme wind chills mean flesh can freeze in as little as five minutes. Several major school districts are closed Tuesday, including those in Minneapolis and Atlanta, to prevent children from waiting outside at bus stops.

Chicago also opened up 12 centers for residents trying to stay warm, one of which was to stay open through Tuesday. Libraries and some other city facilities would also be open, said Evelyn Diaz of the city’s Department of Family and Support Services. Quinn said 100 warming centers were open statewide.

When will this end?

By Thursday, most of the country will be back to normal, CNN meteorologist Brandon Miller said. In fact, some temperatures may even be a bit warmer.