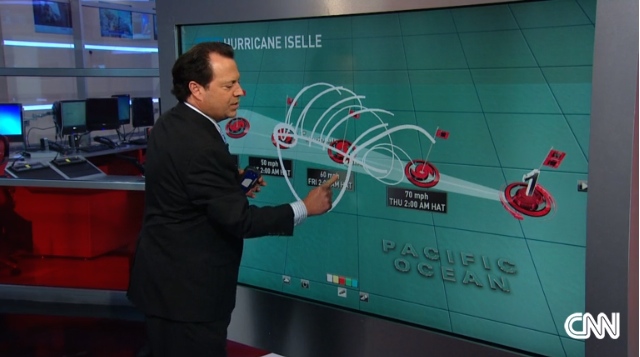 If tropical cyclones do give Hawaii a rare one-two punch this week, the schools on the Big Island and Maui won’t welcome them with open doors.

The Hawaiian government says all schools in Maui and Hawaii counties, the state’s four easternmost inhabited islands, will be closed Thursday, when the first of two approaching cyclones, Iselle, might make landfall as a tropical storm.

Hawaii is a rare target for any tropical cyclone, let alone two. So with a second storm — Julio — also churning west in the Pacific with a potential to brush the islands on Sunday, residents and government agencies braced for the uncertain with varied levels of concern.

In Hilo, customers formed lines from the front to the back of a Cost-U-Less store on Tuesday, clearing shelves of bottled water and stocking up on other supplies.

Bottled water also was sold out at a Honolulu-area Costco.

“So we’re going to bottle up water at home now and just pray for the best,” would-be customer Lisa Viela told CNN affiliate KHON on Tuesday.

Jackie Collins joined a steady stream of drivers trying to fill up vehicle gas tanks at the same Costco.

“We came last night, but it was too crowded, so I thought, ‘Well, today I’d better go,'” she told KHON.

Not everyone was worried. Scott Murray, who owns the Hilo Surfboard Co. and has lived on the Big Island for more than 60 years, said many residents were more optimistic for good surf than concerned about damage and flooding.

“I’m not really worried about his storm,” Murray said.

Hawaii’s primary elections still will go on as scheduled Saturday, despite the storms, KGMB reported. Local media reported that many turned up for early voting in anticipation of severe weather on election day. Others are concerned that voter turnout could be affected.

Iselle and Julio were hurricanes in the Pacific on Wednesday, but both are forecast to weaken to tropical storms by the time they reach Hawaii, if they get there at all.

Iselle appeared to be the more direct threat, with the eye forecast to pass over Hawaii island on Thursday night with sustained winds near 63 mph, the Central Pacific Hurricane Center said Wednesday. Tropical storms have sustained winds between 39 mph and 73 mph.

The storm should bring heavy rain and high surf, which could lead to coastal flooding on islands already saturated by recent rains, the National Weather Service said.

Julio is currently expected to move north of Hawaii on Sunday, but outer bands of rain and strong winds still could affect the islands.

Some airlines are making concessions to customers ahead of the storms. For people who’d been scheduled to travel to or from Hawaiian airports on Thursday and Friday, United Airlines and Hawaiian Airlines say they won’t charge fees to change reservations, and they’ll waive differences in fares for those changes.

Island Air will do the same for passengers ticketed from Thursday though Tuesday. Delta said it would waive fees for reservation changes for Thursday and Friday, but fare increases could apply.

Hawaii doesn’t often have to prepare for cyclones. A 2002 report by the U.S. Geological Survey said that “actual hurricane strikes on the Hawaiian Islands are relatively rare in the modern record.”

“More commonly, near-misses that generate large swell and moderately high winds causing varying degrees of damage are the hallmark of hurricanes passing close to the islands,” according to the report.