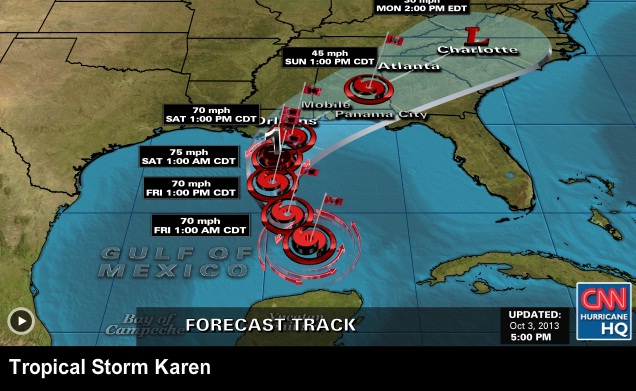 A hurricane watch is in effect for parts of the U.S. Gulf Coast after Tropical Storm Karen formed in the southeastern portion of the Gulf of Mexico, the National Hurricane Center said Thursday.

A hurricane watch covers the area from Grand Isle, Louisiana, east to Indian Pass, Florida, where the center of the storm is expected to arrive Saturday, according to forecasters.

“Karen is expected to be at or near hurricane strength on Friday,” according a center advisory.

The storm, which as of Thursday afternoon was about 400 miles south of the Mississippi River’s mouth, prompted the Federal Emergency Management Agency to recall some of its workers, furloughed during the government shutdown, and reactivated its Hurricane Liaison Team at the National Hurricane Center in Miami. FEMA officials in the Atlanta and Denton, Texas, offices are monitoring Karen.

“At all times, FEMA maintains commodities, including millions of liters of water, millions of meals and hundreds of thousands of blankets, strategically located at distribution centers throughout the United States, including in the Gulf Coast region, that are available to state and local partners if needed and requested,” the agency said in a statement.

The hurricane center said it too would be unaffected by the government shutdown as Karen approaches.

“The National Hurricane Center is fully operational … and has all of its resources available to it,” spokesman Dennis Feltgen said in an e-mail. “The government shutdown will not inhibit NHC from providing its mission.”

A tropical storm watch is in effect from west of Grand Isle to Morgan City, Louisiana, an area that includes metropolitan New Orleans,Lake Maurepas and Lake Ponchartrain.

The storm is moving north-northwest up the Mexican coast at 12 mph, the hurricane center said.

“Karen is expected to produce heavy rainfall over portions of western Cuba and the northeastern Yucatan Peninsula during the next day or so,” according to the center’s advisory.

The storm has a high chance — “near 100 percent” — of becoming a hurricane or cyclone in the next two days, it said.

In the central Atlantic Ocean, Tropical Depression Jerry has sustained winds of 35 mph as it moves northwest at 9 mph. It poses no threat to land.