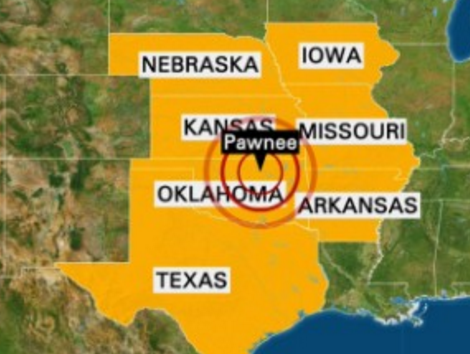 A 5.6 magnitude earthquake struck Saturday morning near Pawnee, Oklahoma, and rattled through at least six surrounding states in the US heartland, according to the US Geological Survey.

The earthquake was also felt in Kansas, Arkansas, Missouri, Texas, Nebraska, and Iowa, according to the USGS.
The Oklahoma Corporation Commission, a regulatory agency that examines the state’s fuel, oil, gas, public utilities and transportation industries, is “reviewing disposal wells in the vicinity of the earthquake near Pawnee,” Oklahoma Gov. Mary Fallin said via Twitter.
The Oklahoma Department of Transportation is checking bridges for damage and structural engineers are assessing building safety according to Fallin.
The earthquake damaged at least one historic building in Pawnee, Oklahoma, city officials told CNN.
“It’s an old historical building about 100 years old. It’s still standing but some of the outer layers of sandstone fell, it could be cosmetic damage, we don’t know yet,” said Pawnee Mayor Brad Sewell.
See photos, tweets and videos here via CNN