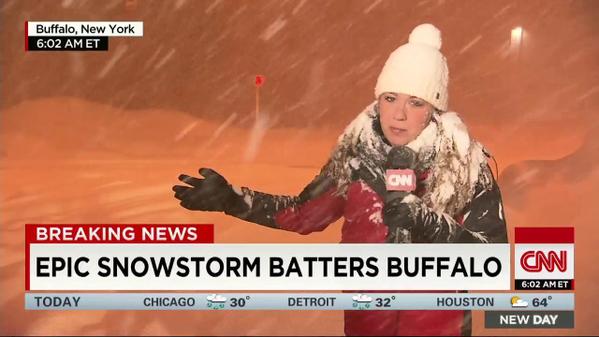 Stories about acts of bravery and kindness were emerging after as much as 6 feet of snow covered Buffalo, New York, one of the hardest-hit areas in a week when snowstorms and record-low temperatures whacked much of the country.

Seven deaths in the region have been blamed on the extreme storm, authorities said.

Buffalo Mayor Byron Brown and city officials Wednesday recounted stories of emergency personnel working double shifts with little sleep, of rescuers trudging around snow drifts as high as houses to get people to hospitals, of fire stations turned into temporary shelters and police officers delivering special baby formula to a pair of infants.

“It is clear that we are one Buffalo,” Brown said.

Nearly a year’s worth of snow in 24 hours Buffalo mayor: ‘There’s a long way to go’ CNN reporter pummeled by snow storm See snowstorm from drone’s point of view

Former Buffalo Bills quarterback Jim Kelly told CNN he was stranded at home but felt the warmth of Buffalo residents.

“There’s a lot of good neighbors, you know this,” he said. “The Buffalo people rally around each other. You love your neighbor and that’s how it is here. Somebody needs help, there’s always somebody there to join in.”

New York’s second most populous city prides itself as “The City of Good Neighbors.”

“Buffalo itself, known as a city of neighbors, has come together and shown a real sense of community and neighbor helping neighbor, which is always good to see,” New York Gov. Andrew Cuomo told reporters.

The weather isn’t letting up. An additional two to three feet of snow could fall later Wednesday and into Thursday, potentially setting a record high in the history of lake-effect snow events.

Snow across the land

About 50% of the United States had snow on the ground Tuesday, according to the National Weather Service.

PHOTO: The inside of Ralph Wilson stadium under a thick blanket of snow and blowing drifts. pic.twitter.com/7Hg3gFcOMI

Buffalo Niagara International Airport, about a 20-minute drive from downtown, was operating Wednesday afternoon but many people were having trouble navigating the snow-covered streets to get to the airport. Most airlines canceled some flights, according to airline representatives and airport spokesman C. Douglas Hartmayer.

“This storm is basically a knife that went right through the heart of Erie County,” said Mark Poloncarz, Erie County executive. “I can’t remember and I don’t think anyone else can remember this much snow falling in this short a period.”

Mayor Brown and other western New York officials said the cost of cleaning up after this week’s storm will be significant, requiring the city and neighboring municipalities to seek assistance from the state and the Federal Emergency Management Agency.

Buffalo State Assemblyman Sean Ryan Wednesday said the area may get “more snowfall this week than the rest of the whole winter combined,” wiping out entire storm budgets in one event.

The Buffalo Bills, who play the New York Jets on Sunday at 1 p.m. ET, are seeking the public’s help to clear an estimated 220,000 tons of snow from Ralph Wilson Stadium, the team announced on its website. The helpers will be paid $10 an hour, plus game tickets if they work a certain number of hours.

The team said the NFL would decide if the game should be rescheduled. Temperatures are expected to break through freezing on Saturday and reach the 50s on Sunday, the National Weather Service said.

Wow – that’s all we can say about @JenniferGrayCNN‘s live shot in Buffalo. Here’s the story: http://t.co/E9WB9RKq7M pic.twitter.com/rYtyifHSJk

Wednesday night’s football game between the State University of New York, Buffalo and Kent State was canceled because of travel issues.

This is only the area’s first snowfall of the winter, but South Buffalo has seen almost as much snow in 24 hours as it experiences in an entire season. About 84 inches is normal, but about 6 feet — 72 inches — has fallen since Tuesday.

Brown predicted a “long way to go” before efforts to clear Buffalo’s roadways are finished after the snowstorm. Already, more than 5,000 tons of snow have been removed from city streets and highways.

A driving ban remains in effect in South Buffalo, with rescuers — mostly from the fire department — using 18 snowmobiles to respond to emergency calls and help stranded motorists, he said.

“It is going to be a slow go,” the mayor told reporters. “Historic amounts of snow have fallen. There is no place to put that snow.”

Emboldened by Wednesday’s sunshine, Brown said, many people headed out onto the streets only to find themselves stranded. On Wednesday, authorities had received 12 calls from people stuck in the snow.

Buffalo’s Mercy Hospital is short-staffed because many employees couldn’t travel. But the hospital Wednesday received truckloads of supplies after some streets were plowed.

Thankfully, there were relatively few power outages in and near Buffalo, where more than 700 customers didn’t have electricity Wednesday afternoon, New York State Electric and Gas Corp. reported. That’s less than 1% of its customers.

Another blast of cold air is hammering the Midwest and Northeast on Wednesday, while the Southeast could see record lows as temperatures drop into the teens and 20s.

At least seven people have died as a result of the storm. Erie County officials said one of the storm-related deaths was from a car accident and three other people died due to cardiac issues that resulted from shoveling snow.

There have been six deaths in Erie County and one in Genesee County.

In Alden, New York, a 46-year-old man was found dead inside a car buried in 12 to 15 feet of snow, authorities said.

In Genesee County, Jack Boyce, a 56-year-old county employee, died after collapsing Tuesday morning while operating a snow blower outside the county sheriff’s office, according to county manager Jay Gsell.

“He had an exacerbation of his condition where he needed emergency medical care and he was unable to be transported to a care facility that had the highest level of care,” she said, adding that the patient died at an “urgent care center.”

Some places in the region have seen more than 5 feet of snow, while others could see 7Â½ feet more after another round of wintry weather hits this week.

That’s the equivalent of a year’s worth of snow that’s expected to pound some areas over a three-day period, Erie County’s Poloncarz said.