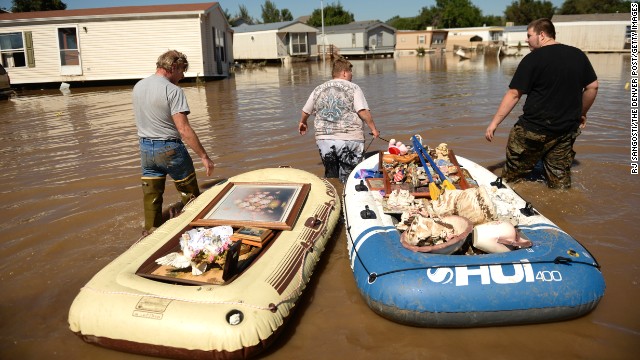 More people were told to evacuate their homes in northeastern Colorado on Tuesday as residents of the flood-stricken towns north of Denver returned to battered neighborhoods, with some of them finding no house to call home.

The small town of Crook, about 150 miles northeast of Denver, ordered residents on the north side of town to clear out as water in a canal rose to “historic” levels, the Logan County Emergency Management Office reported. Residents on the south side of town had already been ordered out of their homes as firefighters monitored the rising South Platte River, the agency said.

Runoff from last week’s floods along the Front Range of the Rocky Mountains is now rushing down the South Platte, which runs from south of Denver into Nebraska. The National Weather Service warned counties in Nebraska would start to see the river overflow its banks by Wednesday.

Rescuers were still plucking hundreds of stranded residents from homes cut off by last week’s flooding on Tuesday. Authorities in Boulder County airlifted 215 people to safer ground on Monday, while Larimer County saw 420 people evacuated, according to officials there.

However, about 600 people are stranded in isolated areas of Larimer County, and rescue crews continued working to evacuate as many as possible Tuesday, authorities said. The week’s weather outlook looked favorable for crews, and forecasts called for only slight chances of afternoon storm mid-week, officials said. 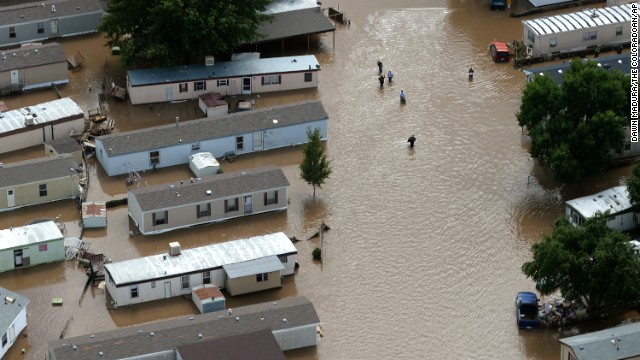 “At this point the mission is getting folks down off the mountain, getting them down safely,” said Nick Christensen, executive officer of the Larimer County Sheriff’s Office.

The air efforts may be the largest such evacuation in the country since Hurricane Katrina in 2005, the National Guard said.

“I expected to see a lot more frustration with folks,” Larimer County Sheriff Justin Smith told reporters. “They have been up there since Wednesday or Thursday without an ability to come down, many of them without water and very limited on food overall.”

But most were “in good spirits,” Smith said. “It was just amazing. It spoke to the spirit of folks that live here.”

“We have significant air resources up,” he added.

The numbers of people unaccounted for during the height of the bad weather dropped again Tuesday, with Boulder County reducing its count to 183 and Larimer County dropping its figure to 197. Most of the people on the unaccounted list are likely alive and well but have failed to check in with authorities to let them know.

For many of those who’ve returned home, however, the scenes are heartbreaking. In the town of Lyons, about 15 miles north of Boulder, flood waters pushed entire houses around like furniture.

“Today is our first day up here since we’ve been evacuated,” Kelly Hunt told CNN. “And I feel like it’s worse than I thought it would be. We lost absolutely everything we own.”

When the thick mud and water moved through the town Thursday, they lifted her house and moved it several feet.

Throughout Lyons, the streets are dotted with snapped power poles. Rescue workers and the National Guard members outnumber residents, who were forced to evacuate.

The two branches of the St. Vrain Creek bisect this town, and nearly swallowed it whole.

Abe Vasquez tried to step through the living room of his 78-year-old mother’s home. His feet slowly sank in the two feet of raw sewage that had pooled there.

“Here’s what’s left,” Vasquez said. “That’s her walker. That’s the other one.”

Stories of grief, generosity and gratitude

It took 79 years to build the place, Vasquez said. It took 24 hours for it all to disappear.

In nearby Longmont, Jeff Larsen considered himself a little more fortunate. His home is damaged. But at least it’s still standing.

“It’s ruined,” Larsen, who returned to Longmont for the first time since Thursday, told CNN affiliate KUSA. “Our basement is gone. It stinks so bad in there, you can barely stand it.”

When the waters rushed in, his wife, Nina, watched as their SUV was whooshed away.

“We watched it float down the road,” she said.

Nearly 18,000 homes around the state have been damaged.

“I think there is still going to be a lot of shock and disbelief,” said Matthew Applebaum, the mayor of Boulder. “The amount of destruction, the damage to people’s houses, the damage to neighborhoods, the damage to roads, the damage to our much beloved open space — it’s pretty significant and, as I said, it’s extraordinarily widespread.”

Like many, Casey Korbely wants to return home. But pictures from his neighborhood in Boulder County show cars buried in mud, and a huge hole that was once a road.

“The cops and firefighters said it would probably take two to three weeks before they can build a bridge and we can get our vehicles out. “

But Korbely is determined to get back — by hiking. An uphill climb … fueled by a Colorado spirit that doesn’t give up.

In Boulder, the Schuler family surveyed the incredible damage to their home, inundated by water and mud. They live in the flood plain, but have insurance.

“It totally took all the furniture and moved it from one room to the other, so it was whipping through the house,” Kim Schuler told CNN as he showed the damage.

The resident said friends have helped them clean up the muck and prepare for the next step.

“It does give you a perspective on humanity,” Schuler said. “There’s a lot of nice people that you don’t know that don’t ask for anything of thanks. They just came in, they helped and they left.”

More than 6,400 Colorado residents in the disaster have applied for aid from the Federal Emergency Management Agency, and more than $430,000 has been approved in individual assistance such as temporary housing and home repairs, FEMA said Tuesday.

Opinion: What we learned from Vermont’s epic flood