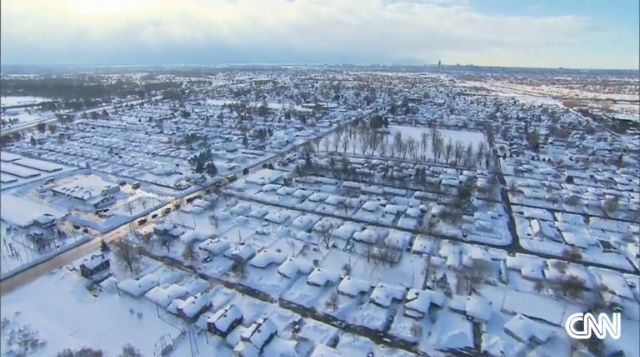 That’s exactly what some Buffalonians will grapple with when temperatures Monday warm up to around 60 degrees (15c).

Swift-water rescue teams and helicopters are already on standby in western New York in case anyone gets caught in a deluge.

New York Gov. Andrew Cuomo said residents shouldn’t wait until the last minute to evacuate if they think their homes will get inundated. He advised such homeowners to clear their basements of valuables.

The governor said dealing with flooding is worse than the snow.

State officials have beefed up stockpiles of generators and pumps and prepared almost 180,000 sandbags.

After last week’s nationwide bout with frigid weather, Buffalo temperatures could reach as 60 on Monday, according to the National Weather Service. Freezing temperatures are not expected again until Tuesday night.

But Erie County spokesman Benjamin Swanekamp said so far, the snow has been melting at a “relatively even pace.”

“The pace of the melting and the lack of additional rain has kept it manageable,” Swanekamp said late Sunday night.

About 700,000 people are under a flood warning until Wednesday, CNN meteorologist Pedram Javaheri said.

Officials have been moving pumps into neighborhoods and sandbags near creeks. So far, the county hasn’t received reports of major flooding.

But Cuomo has asked residents to clean out storm drains in front of their houses “so the water has some place to go.”

There’s also the threat of more building collapses as all the rain saturates the snow on the tops of buildings, making the load even heavier.

While most of the fallen buildings were unoccupied, Swanekamp said, a roof collapse at a dairy barn roof killed 25 cattle.

Cuomo said structural engineers will examine schools and other government buildings that might be in danger of roof collapses. He said most state government offices will reopen Monday.

High wind warnings are issued when sustained winds of at least 40 miles per hour (64km/h) are expected for at least an hour, with gusts of at least 58 mph (95km/h) at any time.

The winds could topple trees and power lines, officials said. And with ongoing snow melt, the saturated ground will make it easier for some trees to come down.

Anthony Marchioli of Buffalo was so bored that he rented a small snow tractor to clear driveways on his street, CNN affiliate WKBW reported.

On the way back from the rental company, he saw his pregnant wife standing in the street outside their house.

Her water had broken. So Marchioli put her on the tractor and pushed through whiteout snow to Mercy Hospital, WKBW said.

And despite the intimidating heaps of snow, strangers came to help any way they could.

“Buffalo is called the City of Good Neighbors for a reason,” she said. “There were people everywhere helping out.”