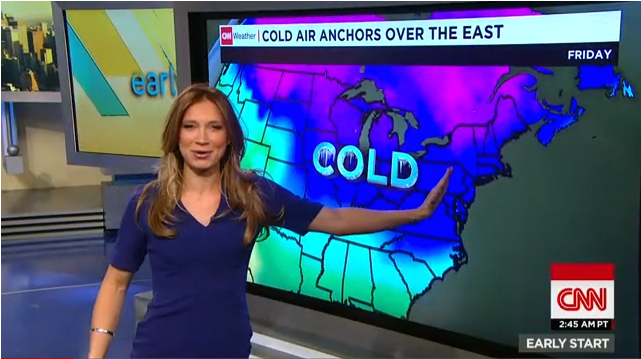 The winter pros in Minneapolis often make it until a few days before Christmas before the first 4-inch snowfall of the season.

This year, they could get triple that by Monday night alone, as an icy blast dipping out of Canada brings an early load of snow across the upper Midwest.

The weather is the result of a “bomb cyclone” — a swiftly and markedly intensifying storm — that shifted the path of the jet stream and sent cold air rushing toward the United States, CNN meteorologist Dave Hennen said.

No worries, some folks say. Bring it.

“This has been the buzz this weekend,” Greg Graves, an employee at Mel’s Trading Post in Rhinelander, Wisconsin, told CNN affiliate WJFW.

“Everyone is talking about the storm that we are supposed to be getting. Most of our customers love to be outdoors so everyone is really looking forward to it,” he said.

Despite the enthusiasm, some problems were evident.

Numerous flights were canceled Monday at Minneapolis-St. Paul airport. And slippery roads were reported throughout the region.

Minnesota State Patrol spokesman Lt. Eric Roeske said on Twitter that troopers had responded to 180 crashes and 131 reports of vehicles that had run off slippery roads. None of the incidents involved serious injury.

In Wisconsin, a school bus slipped off a road in Outagamie County, according to CNN affiliate WBAY. No students were hurt, but the driver and an aide were taken to a hospital for evaluation, the station reported.

“It’s OK to get a nice cold snap now and then, but this one could be dangerous,” Sater said.

The northern Mountain States, the Plains and the Midwest are not the only targets. Much of the nation will feel the punch of cold weather, if not quite as hard, according to CNN meteorologists.

“I think we’re all going to be feeling the bite,” CNN meteorologist Indra Petersons said.

It’s hard to decide whether the snap will be more bearable in Sunburst, Montana, or in Rice Lake, Wisconsin.

If you prefer bitter cold over deep snow, you might like it better in Sunburst. It didn’t exactly live up to its name early Monday with a low of 4 degrees predicted by the National Weather Service.

By Tuesday night it should drop to 11 below zero, and it won’t rise above 6 degrees through Thursday night, the NWS forecasts.

Snow was falling there early Monday and was expected to continue through Tuesday, but only about 3 inches should accumulate.

Not enough snow for you? Then Rice Lake is your place.

Fourteen to 22 inches are forecast for Monday and overnight into Tuesday, then 2 to 4 inches for Veterans Day on Tuesday for a whopping total of 16 to 26 inches.

The main snow blanket will extend across a swath from Idaho down through South Dakota and northern Nebraska and over to northern Michigan.

On the blanket’s fringes will be flurries, sleet and rain.

The cold snap will bring lows in the teens and single digits into Iowa, Kansas and Colorado this week but also spread freezing temperatures as far south as Texas.

“Much of the nation east of the Rockies is expected to see a major pattern change by the beginning of the work week,” the weather service said.

The frosty blast will stop short of the Southeast and Southwest, leaving them in a temperate fall warm-zone with highs into the 70s.

But even in the thick of it, some places will pull the longer straw. Milwaukee should see more rain than snow, Chicago the same, and temperatures there should be relatively mild, the weather service said.

Residents in the northern United States can thank a whopping Pacific tropical cyclone for the wintry blast.

Super Typhoon Nuri was akin to Hurricane Katrina and Superstorm Sandy rolled into one. It had the strength of a category 5 hurricane, CNN’s Sater said.

It is the strongest Northern Pacific post-tropical cyclone on record, the NWS said.

Its remnants explosively intensified up north over Alaska’s Aleutian Islands last week and plowed into cold air, which added violent energy to the storm. It was similar to what happened with Superstorm Sandy in the Atlantic two years ago and earned the storm the little-used “bomb cyclone” moniker.

The hybrid storm rammed into the jet stream, causing it to whip south, dragging Arctic air down with it.

It also continued to spin, Sater said, further fanning down polar cold. The biggest chill arrives on Wednesday and Thursday.

Things will get warmer over the weekend, but it won’t stay that way, he said.

Another Arctic blast is on its way for next week.