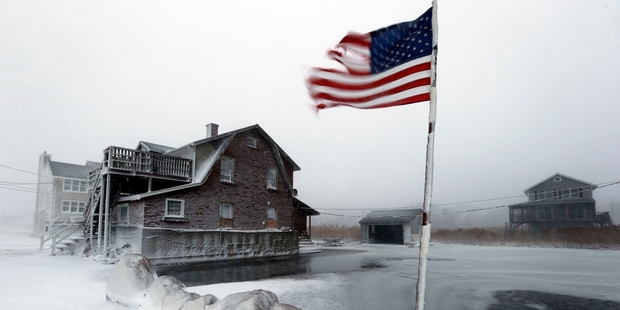 The winter storm which slammed into the US northeast with howling winds and frigid cold, dumped nearly 60cm of snow in some parts and is whipping up blizzard-like conditions.

US airlines cancelled more than 2300 flights nationwide  ahead of the storm, especially at New York and Boston airports. By yesterday, about 1800 flights were cancelled nationwide, according to website FlightAware.com.

Governors in New York and New Jersey declared states of emergency, urging residents to stay at home. Hundreds of Boston and New York schools closed, extending the holiday break for thousands of students.

“This is nothing to be trifled with,” New York Governor Andrew Cuomo said.

The storm has led to at least 16 deaths as it sweeps across the eastern half of the US. Slick roads have caused traffic deaths in Michigan, Kentucky, Indiana and Illinois.

A massive pile of salt fell on a worker at a Philadelphia storage facility, killing him. And authorities say a woman with Alzheimer’s disease froze to death after she wandered away from her rural New York home.

Forecasters said temperatures were plummeting to well below freezing, and wind chill readings could hit minus 23C.

Another wave of cold air was yesterday moving through the midwest after coming down from Canada.

Outreach teams were searching streets in New York City and Boston for homeless people at risk of freezing to death.

The heavy weather began rolling in just a day after New York Mayor Bill de Blasio was sworn in.

“We have to get it right, no question about it,” de Blasio said. “We are focused like a laser on protecting this city.”

The storm worked its way east from the Midwest, dropping up to 43cm of snow in parts of Chicago.