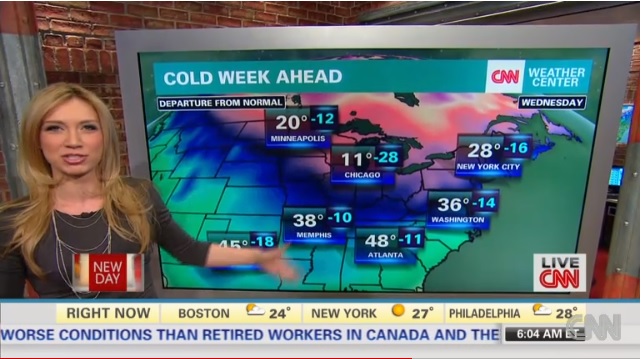 For those of you in, or about to travel to, the USA – don’t put away those winter coats and hats yet!

The United States are in for another blast of cold Arctic air, which is gearing up to roll across most of the country this week, but it won’t be as bad as the shocking freeze in January.

The National Weather Service says some places from the central U.S. to the Ohio and Mississippi Valleys could be having some frosty high temperatures, as low 20 to 30 degrees below normal.

If you call it Polar Vortex Part II (or III or IV), meteorologists say you’d be wrong — nor was the first big cold spell of 2014, strictly speaking, a strike of the Polar Vortex.

The Polar Vortex stays anchored over Baffin Bay, to the north of Canada, and doesn’t move, says CNN meteorologist Sean Morris. But its shifting pattern allows cold Arctic air to spill southward into the United States.

“When it weakens, this allows the cold Arctic air that is often mislabeled the “Polar Vortex” to spill southward across the U.S. border and bring us bone-chilling temperatures,” Morris explained.

So from a technical perspective, “if you’re looking to get ‘struck’ by the vortex, you’re out of luck,” he added.

Although this cold snap doesn’t have as menacing a name, the Arctic air blast will cause temperatures to plummet 25 to 35 degrees below average east of the Rocky Mountains, Morris said.

Temperatures will drop Tuesday to 10 to 30 degrees below normal for this time of year in places such as Minnesota and the Dakotas. Then the arctic blast will roll east.

By the middle of the week, the freeze zone will sweep the Midwest and the East Coast, plunging lows into the single digits in Indiana and Massachusetts, among other states.

It will cover two thirds of the country; even parts of the Deep South will drop down below freezing — but just for a night or two, the National Weather Service said.

There will probably be some snow here and there, but the good news is that things should stay pretty dry, the weather service said.

Many of us will shiver. That’s about it.

It won’t be like that original “Polar Vortex” — which again, was a misnomer — which debuted in early January. In case you forgot: The country experienced record low temperatures and freezing pipes all the way down to Alabama when a large frigid air mass broke free from the Arctic and came down to visit.

Meanwhile, along the Gulf Coast, a warm front will increase shower and thunderstorm activity in that region and the Southeastern states Tuesday and into Wednesday.

“By Wednesday afternoon, the front begins to push offshore again and heavier precipitation should begin to diminish. However, a developing surface wave along this front could clip the Mid-Atlantic with some light snows on Wednesday before it moves farther out to sea,” the National Weather Service said.

For those of you in the West, you will probably not experience precipitation Tuesday except for possible light snow showers in the higher terrain of the Northern Rockies. Wednesday, precipitation will move inland through California.

Back in the cold East, well, maybe Punxsutawney Phil saw this coming.