USA – A ‘train of storms’ heading towards the Northwest 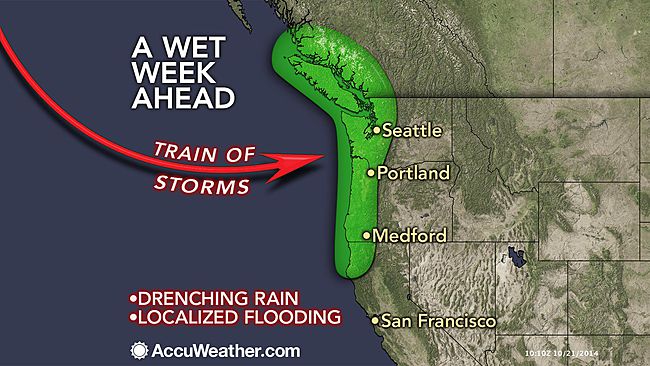 A so-called ‘train of storms’ is currently lining up over the northern Pacific ocean, and is expected to hit the Northwest USA and British Columbia early next week, according to Accuweather.com.

The forecaster says the storms will bring rounds of drenching rain and perhaps a few episodes of gusty wind to coastal areas from northern California to Oregon, Washington and British Columbia.

According to AccuWeather Senior Meteorologist Bernie Rayno, “The storms will bring heavy rain to coastal areas, which can be enough to cause flash flooding and mudslides.”

Accuweather.com said that some rain may even reach far enough south to affect the World Series games in San Francisco.

In some good news, some of the rain will reach and may benefit hard-hit drought areas of northern California and southern Oregon.

More sporadic and less intense rainfall will push farther south in California, but not to the extent to have significant impact on the long-term exceptional drought just yet.

Meanwhile, forecasters tracking Ana report that it continues to move over the central Pacific Ocean, west of Hawaii.

According to AccuWeather Senior Meteorologist Henry Margusity, “Some of the moisture and winds from Ana may either survive or help fuel another storm off the coast of the Northwest.”

“That system may then plow onshore during the first part of next week with heavy rain and gusty winds,” he said.