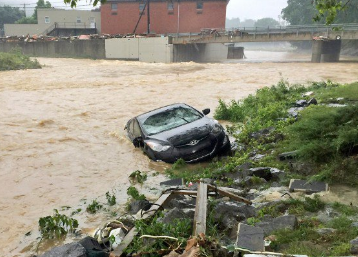 It is the deadliest U.S. flash flooding event since May 2010, according to CNN meteorologist Allison Chinchar. In 2010, flooding killed 27 people in Tennessee, Kentucky and Mississippi.

Trees and power lines fell as heavy rains sent creeks and rivers over their banks late Thursday and early Friday, leaving many stranded residents waiting to be rescued.

The governor declared a state of emergency Thursday night in 44 counties, covering most of the state. Eleven counties, located in the northern and eastern panhandles, were not on the list.

The cities of Elkview, Clendenin and Frame in Kanawha County have been particularly hard hit by the flooding, officials said.
Tomblin activated 200 National Guard members to assist in eight counties and has authorization for as many as 300 more to help with the rescue and response efforts, the governor’s office said Friday.
“Together with the National Guard, our first responders, local emergency management officials and firefighters from across the state have been working around the clock, and we are deeply appreciative of their efforts,” Tomblin said in the statement.

A 4-year-old boy was washed away by floodwaters in Jackson County, officials said. The child was playing with his sister behind their home when he fell into a stream that had instantly turned into a rushing current after the relentless storms. An 8-year old boy from Ravenswood in Jackson County was also killed in the violent storm.

Severe damage to homes and infrastructure can be seen throughout the state, residents said. At one point during the height of Thursday’s storm, there were 64 active emergency calls in Kanawha County, according to county spokeswoman Brooke Hylbert.

The high terrain along rivers is exacerbating the flooding, meteorologists said.
Weather radar estimates show that more than 10 inches of rain have fallen in portions of Greenbrier County.
There is a one in 1,000 chance of this type of rainfall happening in any given year, according to the National Weather Service.
In Kanawha County, which includes the capital of Charleston, the Elkview River crested at 33.37 feet Friday morning, meteorologists said.
The river rose more than 27 feet from Thursday afternoon to Friday morning, the highest crest since record-keeping began more than 125 years ago, according to the weather service.