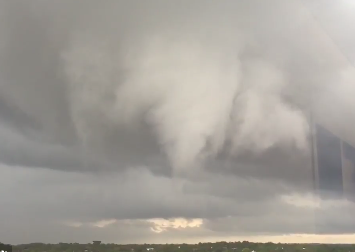 A rash of severe weather tore through the central United States, destroying houses and ripping large trees out of the ground.

The threat of imminent tornadoes is likely over, CNN meteorologist Pedram Javaheri said. But fierce straight-line winds — which could reach up to 80 mph (128km/h) — will likely continue as the storm heads east.
Next under the gun: states along the lower Mississippi River, from Missouri to Louisiana. Those areas can expect severe storms through Wednesday night.

“Strong to isolated severe winds will be the primary hazard south, with a mix of severe hail and damaging wind north,” the weather service’s Storm Prediction Center said.

VIDEO: tornado forming over SW Omaha taken by chaser Mike Lachendro out the window of his workplace pic.twitter.com/seVDELrgjx

One of the most damaging tornadoes touched down in Grayson County in north Texas.
The storm shredded roofs, flipped over semi-trucks and sent at least five people to the hospital, KTVT said.

Farther north, a tornado touched down in Checotah, Oklahoma, McIntosh County Emergency Manager Harry Trottier said. The storm caused a major gas leak, but there were no injuries.

More than 195 reports of hail-related damage emerged from the storm, the Storm Prediction Center said.

And about 11,000 lightning strikes touched down between Kansas City and Dallas in just 30 minutes Tuesday night, CNN’s Javaheri said.

The storm also snarled airline traffic across the Midwest. Passenger Leah Wilmington was stuck on a plane in Cincinnati as torrential rain prevented her departure.

“I think I’m going to miss my connection…,” she wrote. She said the rain was so intense it was difficult to see the planes at nearby gates.