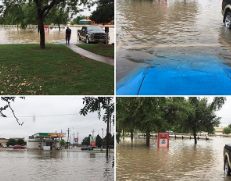 Five Fort Hood soldiers are dead and four are missing, the latest victims of an onslaught of flooding in Texas that shows no sign of letting up.

The soldiers’ tactical vehicle overturned at a low-water crossing near Owl Creek at the Central Texas Army base, the public affairs office said. The bodies of three soldiers were recovered downstream; three more were rescued near the vehicle and brought to a hospital in stable condition.

The search continued for six missing soldiers amid a flood warning in the area, after a May that saw record rainfall in locations across Texas. So far, June has not brought a reprieve and more rain and flooding is expected, CNN meteorologist Chad Myers said.

He warned that saturated ground and swollen creeks, bayous and rivers could not absorb it, as the incident involving the soldiers demonstrated. Bell County, Texas, Emergency Manager Michael Harmon said Owl Creek, the area where the vehicle overturned, regularly experiences flash floods.

The weather would start turning around late Saturday, Myers said, but he warned that its aftermath would bring Texans a different threat: mosquitoes.

He said the stagnant water would likely not recede for weeks and the insects were already flying around his shoes. He was walking on sodden grass near a flooded state park in Houston, now under about 10 feet of water.
“This will last for weeks,” he said. “I don’t have to tell you what that means for West Nile, for Zika,” referring to two viruses spread to humans by mosquitoes.

BREAKING: Ft. Hood says 3 of the soldiers in the vehicle found dead, 3 were rescued alive & they are searching for 6 pic.twitter.com/eNCAw4qfHz

All indicators so far portend more trouble. With 7.51 inches of rain in the first two days of the month, Houston has already surpassed its monthly average rainfall for June, 5.9 inches. That follows the last week of May, which also set records for rainfall in the Houston area.
A flash flood watch will be in effect for all of south-central Texas until Friday morning, according to the National Weather Service. The storms could produce rainfall totaling more than 2 inches per hour and 60-plus mph winds.

“These rates, in combination with saturated soils, will result in rapid flash flooding,” the weather service said.
Lubbock has been particularly hard-hit. Pictures on social media showed residents struggling to cope with rains that have nearly turned streets into rivers.

“The most important thing we’re preparing for now is that we’re in the middle of a historic river flood event, and we’re facing severe rainfall,” said Jeff Braun, emergency management coordinator for Fort Bend County. “We are about to get a large amount of rain, and a lot of it will have nowhere to drain.”