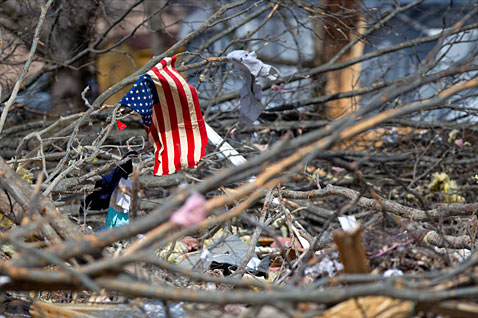 A swarm of tornadoes tore through the U.S. midsection today, splintering homes, damaging a prison, overturning trucks and killing at least four people in the hard-hit state of Indiana.

At least one person died in the southern Indiana town of Henryville, where television images showed homes blown apart and vehicles including a school bus thrown into buildings. Three others died elsewhere in the state

Tornadoes have also touched down north of Huntsville, Alabama severely damaging a high school. Twisters also were reported in Illinois and Tennessee.

The U.S. Storm Prediction Center warned that parts of 19 states would bear the brunt of “a significant severe weather episode,” the second this week.

A severe weather warning has been issued for flash flooding in large parts of New South Wales’ south and west as well as heavy rainfall warnings in Victoria’s north-east and Gippsland regions.

Yesterday the NSW central west city of Bathurst was cut in two by flooding and the Macquarie River covered the Great Western Highway, cutting the major link between Sydney and the west.