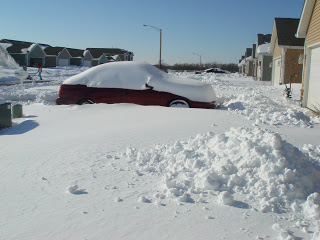 It’s been a severe winter for parts of the Midwest and Northeast US and the latest event is yet another to hit the regions.

A new round of heavy snow is moving across the Great Plains, pushing wheat prices down, closing highways and airports plus threatening parts of the Midwest that received more than 30 centimetres last week.

Both Amarillo and Lubbock international airports are now shut.

The heavy snow may help alleviate some of the drought that has plagued the central U.S. since last year and Texas since 2011.

Blizzard warnings stretch from eastern New Mexico through the Texas Panhandle into Oklahoma and Kansas, according to the weather service. Winter storm warnings and advisories reach across Missouri, Arkansas and Illinois into Wisconsin, Michigan, Indiana and Ohio.

The storm will move east today and threaten the Midwest with snow tomorrow. Chicago may receive more than 15cm of snow starting later tonight,(NZT) and continuing through the day during Wednesday.

Parts of the three eastern states of Australia are set for further heavy rain today with the chance of thunderstorms.

Yestetrday torrential rain resulted in the death of one man and a close call for a family of three in their vehicle.

Authorities are still warning that flash flooding is possible from Bundaberg south to Brisbane.

Overnight, residents in low-lying areas of the Lockyer Valley, west of Brisbane, were urged to evacuate as Laidley Creek continued to rise.

With flooding expected in the area today, evacuations centres have been set up in Toogoolawah.