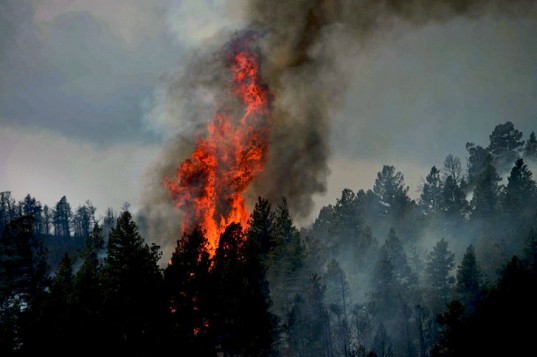 Fire crews watched the winds overnight in Santa Barbara as they struggled to corral a wildfire that sent thousands of campers fleeing the mountains above the city and threatened dozens of cabins.

The wind-driven blaze had nearly doubled in size since it erupted Monday afternoon, carving its way through 4.5 square kms of tinder-dry chaparral, oak and pine. The forecast later in the day is for wind gusts of up to 70kph according to Santa Barbara County fire captain David Sadecki.

More than 550 firefighters were on the line, supported by a dozen aircraft.

At its peak on Monday, the fire prompted the evacuation of about 50 homes, mainly cabins and holiday rentals, and forced as many as 6,000 campers to evacuate forest areas. Those evacuations currently remain in effect.

The fire also burned two vehicles and a US Forest Service garage and sent an enormous ashy plume over the mountains.

Yesterday the weather was calm initially and the blaze was moving sideways along the mountains north of Santa Barbara. But crews were concerned a wind change could push it down among the homes and businesses of the scenic coastal town, Sadecki said.

“It’s an out-of-control wildfire so it is a threat. There’s a lot of dry vegetation in its path,” Sadecki said. “It’s still spring – it’s not even summer – and it’s burning like it’s August or September.”

To the south, a fire in the wilderness in San Diego County scorched hundreds of hectares of dry brush but was not a threat to homes or buildings.

The blaze southeast of Julian city was sparked around midday Sunday and was almost halfway under control. Fire officials were investigating whether it was set intentionally.