US drought at historic levels 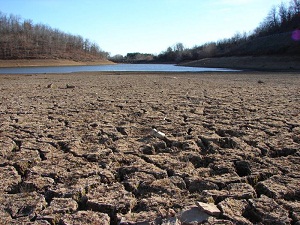 While most of New Zealand has been deluged with rain the last few days, Americans are dealing with exactly the opposite problem.

61% of the lower 48 is now experiencing some type of drought condition.  Over 1/3 of the nation’s corn growing land is experiencing a severe drought.  In the largest disaster declaration in history, 1016 counties (districts) spread across 26 states have been named natural-disaster areas.  Also called Federal Disaster Areas, the declaration means they qualify for government assistance including low-interest, emergency loans to farmers and ranchers.

Meanwhile, in a report expected to be released Monday (US Time) , the National Climatic Data Center is expected to announce that this year’s drought now ranks among the ten largest drought areas in the past century.  Monday’s State of the Climate report is expected to show that since 1895, only the extraordinary droughts of the 1930s and 1950s have covered more land area.

However, if you exclude the “moderate” drought the rankings change a bit.

Although different drought measures can rank this drought at different levels, they all agree that the overall drought ranks as the 10th largest severe drought since 1895.

So what does this mean for the world’s largest corn producer?

Rich Tinker, the author of the Drought Monitor says 30% of the corn crop in the 18 primary corn-growing states was in poor or very poor condition last week.  That’s up from 22% from the previous week.

The record-breaking dry weather comes along side record-breaking heat.  The National Oceanic and Atmospheric Administration (NOAA) says the period from January through June was the warmest first half of any year on record for the lower 48.

And it’s not over yet.  There is a little rain in the forecast for the central and midwestern sections of the United States for the upcoming week.  But even if it does happen, it likely to be very little.  Certainly not enough to bust the drought.