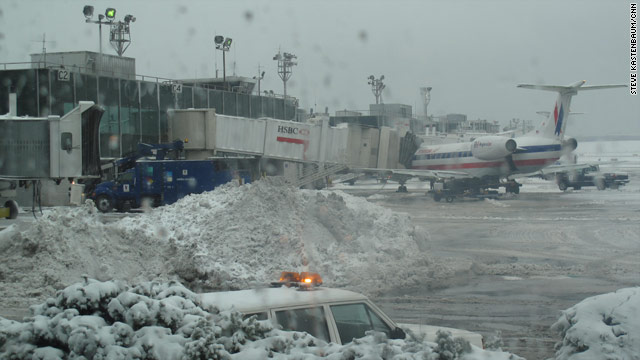 A blizzard has halted operations at several airports in the Northeast, and thousands of flights have been cancelled.

No flights will operate at Reagan Washington National or Dulles International airports on Wednesday, according to the Washington Metropolitan Airports Authority.

Crews at the Washington airports continue to work on clearing runways.

“We’re working, and we’re plowing as best we can and then once the winds diminish some, we’ll be able to start hauling snow off the airfield as we’ve been doing for six days now,” said spokeswoman Tara Hamilton.

Operations will continue for as long as crews can keep the runways clear, said Steve Coleman, a spokesman for the Port Authority of New York and New Jersey.

Most airlines canceled Wednesday flights in and out of Baltimore/Washington International Thurgood Marshall Airport, according to the airport’s Web site. Some airlines have cancelled flights through Thursday morning.

Delta Air Lines has temporarily ceased flights in and out of Washington, Baltimore, Maryland, and Philadelphia, Pennsylvania, and the majority of flights are canceled in and out of New York and Boston, Massachusetts, Delta spokesman Anthony Black said. The airline has canceled 900 Wednesday flights.

United Airlines canceled about 600 Wednesday flights, according to spokeswoman Sarah Massier. More than 1,000 flights on US Airways and its affiliate US Airways Express have been cancelled, according to the airline.

American Airlines and American Eagle canceled about 500 flights Wednesday, according to spokesman Tim Smith. The airline’s operations in the Washington area have been suspended through noon ET Thursday. American’s operations in Philadelphia have ground to a halt and are expected to resume Thursday morning.