Home > News > Snow maps and wind chill details as next... 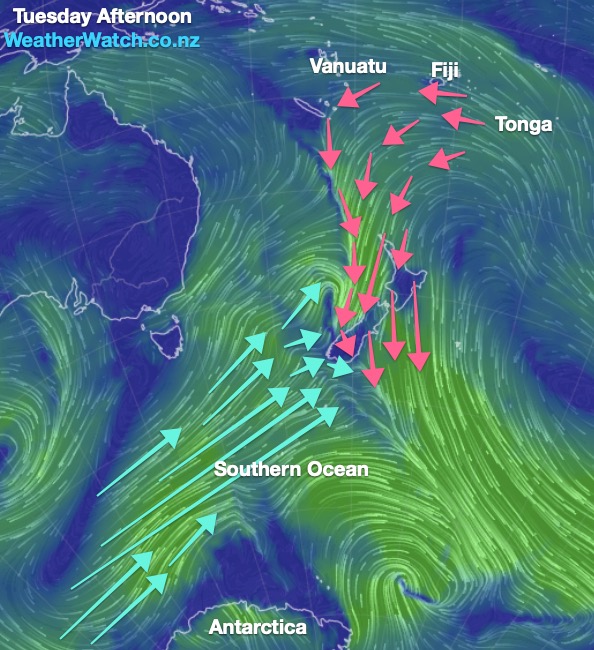 Updated 2:12pm — It gets warmer before it gets colder, as mild north to north west winds push temperatures up ahead of another wintry change.

Parts of Christchurch are this morning 20 degrees warmer on where they were at the weekend as frosty weather melts away to a windy, warm, nor’wester. The windy weather will head north today with coastal gales in a number of regions and blustery conditions elsewhere.

The cold change arrives in the south later today then spreads northwards over Wednesday, Thursday and Friday and doesn’t ease for some until Sunday. This is longer lasting than the more intense polar blast last week.

WIND CHILL:
Below zero in a number of places. Dunedin is forecast to have a wind chill below zero developing overnight tonight and then not rising above 0C until Sunday… that’s four full days with a windchill below zero in exposed places. Even at best the milder more sheltered areas will still be hovering around 0C or +1C in the wind.

For newborn lambs inland and higher elevation the windchill will be even lower and could again linger for not just one day, but a number of days.

You can check your wind chill using the TEMPS tab at the top of www.RuralWeather.co.nz – for every location in NZ, hourly, for 10 days out.

Snow accumulation isn’t huge for most low lying places, but may still make driving hazardous with 1 to 5cm possible. Higher up and the mountains will get 20cm to 80cm of snow on the summits.

GALES:
Windy weather across Tuesday as the northerly flow gets ‘squashed up’ ahead of the southerly change. Windiest weather will be in central NZ from Taranaki through Cook Strait to eastern coastal Marlborough.

Check your local forecast for more details about winds today and keep an eye on the MetService warnings page, which can now be found here at WeatherWatch.

TEMPERATURES – DEPARTURE FROM NORMAL
Another mild night (in comparison to recent nights) coming tonight, but as you can see it then gets colder over the coming nights as this Southern Ocean airflow sets in.

RAINFALL:
Heavy rain on the West Coast with over 150mm possible over the next 24 hours or so. This is quite heavy and could lead to localised slips, flooding and even impact some roads and/or highways.

The most accurate rainfall forecast data in NZ can be found in your local WeatherWatch or RuralWeather forecast for any specific location.

You can now find all official MetService Warnings LIVE on the WeatherWatch website – Click here or on the map below.

Hey guys, great prsentation again, thanks.
Just wondering, how hard is it to predict humidity?
I worked in Dubai etc for a while, and it could be 28oC and cool due to dryness.

For example, is the time it takes for washing to dry based on wind, humidity and temperature (and lack of rain)??
What about paint?
We have a UV “time to burn’ index, how about a “watching the paint dry” index?
Best, Ian

Hi Ian,
Thanks for the kind feedback – and for the interesting question. Humidity is easy to forecast and our RuralWeather.co.nz website has hourly humidity levels for each hour over the next 10 days. Your idea(s) are great and we are hoping to build a Laundry Index and Spray/Paint Index in 2022. Humidity, air temp, rainfall % and rainfall total, plus wind speed and cloud cover all factor in to those equations. All a work in progress 🙂
– Cheers
Phil D