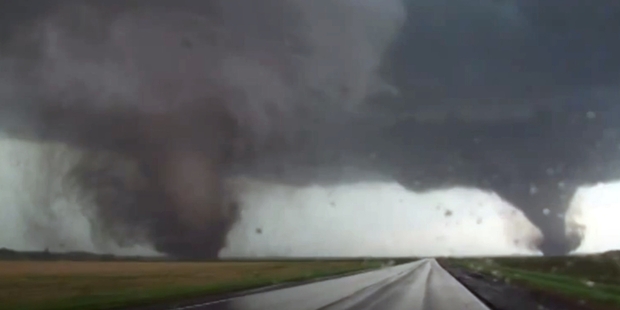 A 5-year-old child was killed and at least 19 people were injured after huge tornadoes swept through northeast Nebraska, destroying more than half of the town of Pilger.

The National Weather Service said at least two twisters touched down within 1.5km of each other. Emergency crews and residents spent the evening sorting through demolished homes and businesses in the town of about 350, roughly 160km northwest of Omaha.

“More than half of the town is gone – absolutely gone,” Stanton County Commissioner Jerry Weatherholt said. “The co-op is gone, the grain bins are gone, and it looks like almost every house in town has some damage. It’s a complete mess.”

Victims were taken to three regional hospitals, and at least one had died, hospital officials said. The Stanton County Sheriff’s Office confirmed that the person killed was a 5-year-old child.

It didn’t specify the child’s gender.

Unger said five people had to be rescued from a rural home daycare facility northwest of Stanton. That home was hit just before the storm moved into Pilger.

Nebraska Governor Dave Heineman declared a state of emergency, and the National Guard was preparing to deploy to assist local emergency responders and help with the clean-up. Heineman and officials with the Nebraska Emergency Management Agency were expected to arrive today.

Pilger was evacuated for the night, and the Nebraska State Patrol closed all roads into town. Most residents made their own arrangements, but some were taken to a shelter at a school in nearby Wisner. About a dozen residents had arrived at the makeshift shelter and school officials were expecting more, said Wisner-Pilger Schools superintendent Chad Boyer. The shelter will remain open to residents for as long as needed to offer food, water, showers and cots.

“I just have to use one word – devastation,” Boyer said from inside the school. “It’s a tremendous loss all around the town. Certainly, our thoughts and prayers are with the community.”

Tornadoes caused damage in Cuming and Wayne counties, the Nebraska Emergency Management Agency said. “We are still in a response mode in these communities,” said Earl Imler, an official. “We are collecting reports from officials on the ground.”