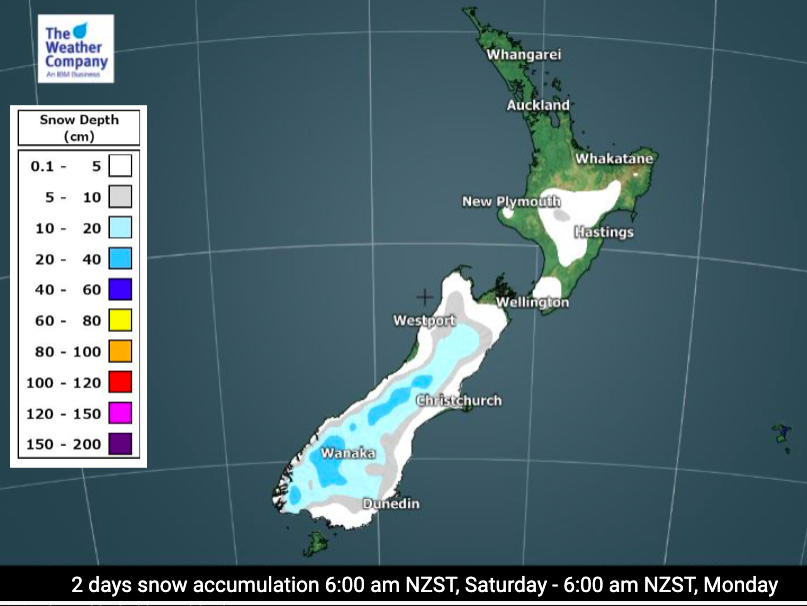 A shot of cold air will move up NZ this Sunday and Monday bringing a chance of light sea level snow (or low level snow) to the South Island and a dusting of snow across the North Island’s higher elevation areas.

Highways in both islands may be impacted (see the snow map below) from Sunday to Monday (which are the peak cold days).

Windchill is pretty low with some exposed parts of Southland, Otago and Canterbury hovering around freezing for about 24 to 36 hours and dipping down to about -3 or -4 at times, like on Banks Peninsula. However, wind chill from the polar blast a month or so ago was actually lower. The issue this time around may be that there is more wet weather, which can be the killer for newborn lambs when you add on the windchill.

As for snow, heavy falls in the mountains and ranges of the South Island are fairly widespread too. Snow will be heaviest above 400m but snow flurries are possible down to low levels (100m) and there may be a snow/rain mix to sea level (where it doesn’t usually settle (or settle for long) but isolated pockets get a chance of snow).

Peak cold will likely be early on Monday morning before dawn so that’s likely to be when we see the lowest flurries.