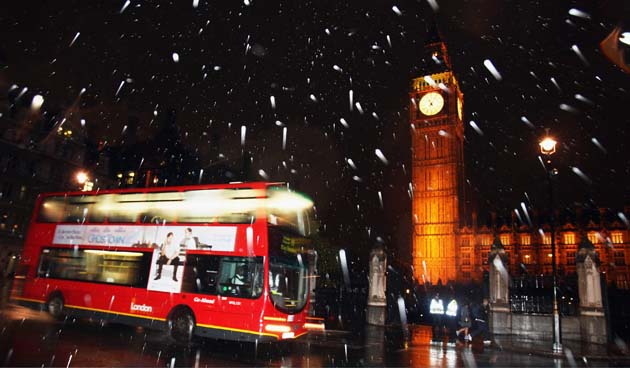 During the weekend our new UK Correspondent Kris Surtees took a look back to the beginning of the British Winter and this evening he completes his detailed column on the coldest season of the year and also touches on Spring.

By late December, it became pretty apparent that a Sudden Stratospheric Warming (known as an SSW) was about to take place. More detail on what exactly an SSW is can be found in an article I wrote here (http://www.ukweatherforecast.co.uk/stirrings-in-the-stratosphere/), but in short it essentially helped to reverse the wind direction around the Northern Hemisphere, and set in place what would be a much colder second half to the winter.

These colder conditions arrived towards the middle of January right across Europe and the UK, wreaking havoc for many days. A wedge of high pressure set up across Scandinavia, and so the Atlantic fronts that had been moving in from the South-West up until now were experience some difficulty as they bumped into the colder air. This created several snowfalls as the milder air to the South, and the colder air to the North, set up a battleground across England and Wales. 30cm of snow fell across South Wales on the 18th of January whilst 5-10cms fell pretty widely across the UK.

On the 20th, an area of snow moved North out of France, bringing a further 5-15cms of snowfall across many Central and Eastern parts of the UK. The cold finally relented on the evening of the 25th January, but it went out with a bit of a bang as the final battleground took place across Northern areas of the UK, where some 20cms of snow fell in a very short space of time overnight, trapping motorists on the M6 motorway for many hours.

Things never quite recovered to what you would call ‘mild’, however, for a time temperatures recovered somewhat through the first half of February as a return to more unsettled conditions took place, with snow mostly reserved for the higher ground of England and Scotland. It was still winter though after all, and as high pressure settled things down initially towards the middle of the month, this then moved North, and allowed a colder easterly flow to return to the UK once again. Whilst snowfall was generally limited, with just some mostly light flurries recorded for most eastern areas, around 5-10cms fell across some North-Eastern parts of England as the cold air interacted with the warmer North Sea, triggering a process called Convection, and creating some heavier snow showers.

As the high pressure slipped South-Eastwards and introduced some milder air on the 5th March, people began to look back at the winter thinking spring was on the way. After all, temperatures reached around 12-18c across many parts. This would prove a false dawn though in a winter than refused to let go. Towards the 10th March, some exceptionally cold air for the time of year once again flooded into the UK from the East, bringing snow showers to many Eastern areas, and in recent days some of the heaviest snowfall that The Channel Islands has ever seen, as evidenced by the picture below of a snow drift on Guernsey, as heavy snow combined with 50mph winds to create an 18 hour blizzard.

The snow hit the South of England too, where 5-15cms of snow was rather poorly forecast by the UK Met Office, resulting once again in drivers trapped on motorways across Kent and Sussex overnight, and temperatures even by day struggled to reach 0c – exceptional for March.

The months December to February finished around 0.2c colder than average as whole, though there was a rather West/East split, with England finishing around 0.5-1c below the 1981-2010 average, whilst Wales, Scotland and Northern Ireland finished around average overall.

And in the winter that refuses to let go, snow fell across Scotland over the weekend, with colder air modelled to return to the whole of the UK next week, and some further disruptive snowfall is expected somewhere in the UK…though the exact location of this is providing something of a forecasting headache at present for us. I will update you on the outcome of this next week.
Until then, take care, and enjoy the warmth whilst we continue to shiver over here!
Kris