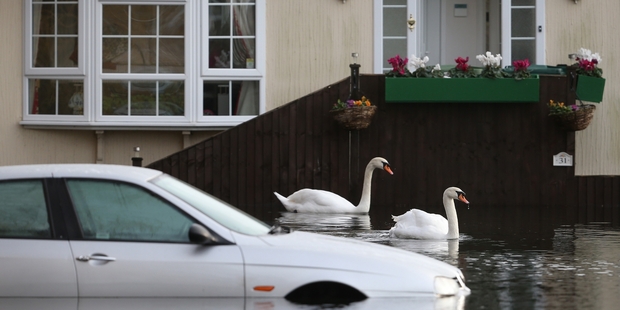 Some of Britain’s wealthiest homeowners were unable to keep floodwater from their doors in the west London area known as the celebrity riviera, the Telegraph reported.

Multi-million-pound properties throughout the Thames Valley in Berkshire, which once stood overlooking the river, were engulfed by its fast-flowing, murky waters.

The area is home to a number of stars, including Sir Michael Parkinson, Sir Terry Wogan and magician Paul Daniels.

In Wargrave, the water was waist deep on a drive leading to Daniels’ 1.2 million ($2.4 million) home.

Fresh flooding hit towns and villages close to the River Thames in Surrey as river levels rose and the Environment Agency issued 94 flood warnings – 12 between Staines and Thames Ditton.

Levels are expected to rise again as rain that fell on saturated ground drains into the river system.

Communities along the River Thames should be prepared for further flooding over the next two to three days, the agency has said.

People living along the lower reaches of the Thames, the Avon in Hampshire and the Stour in Dorset were warned to remain prepared for the risk of further flooding.

Nigel Parkes, 53, a former police officer whose property overlooks the river, said that apart from high insurance, the swollen river would not affect house prices.

Further showers are forecast to return for the whole of the country from early next week, but the Met Office said these will not be as heavy as recent downpours. Warnings of ice and fog have been issued with temperatures expected to dip to around 5Â°C this weekend.