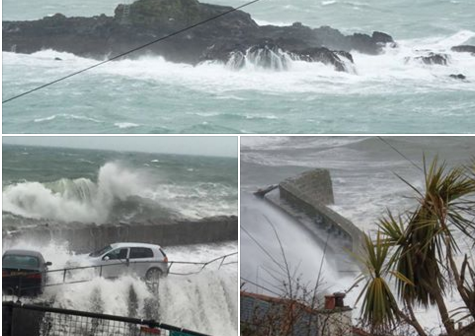 Homes in the South West were flooded today after enormous waves and 65mph (110km/h) winds rocked the coast.

The waves struck buildings and smashed windows in Cornwall as severe weather coincided with a spring high tide.

The Ship and Castle Hotel in St Mawes was flooded, while at least three homes in Penzance were also affected, according to reports.

The waves also crashed over sea defences in Devon, resulting in a number of delays on trains out of the region.

Fire crews were called to deal with flooding, while the Met Office issued a severe weather warning for the South West.

This evening, the Environment Agency had 13 flood warnings in place across Devon and Cornwall, the Plymouth Herald reports.

Elsewhere, parts of Britain were left covered in snow today – while other areas were bathed in glorious sunshine.

Some residents in Northumberland found themselves surrounded by deep snow this morning following overnight blizzards.

And two people in the region had to be rescued from a car after becoming stranded by the sea on a tidal causeway.

The rescue mission took place on the road that leads to the island of Lindisfarne, that sits around one mile off the Northumberland coast.

The couple were eventually saved by the coastguard and taken back to dry land.

Northumbria Police said they were ‘safe and well’ and the vehicle would remain on the causeway until it was safe to return.

Warning signs at either end of the road urge drivers to check the tide times, which explain when it is safe to cross each day.

Lindisfarne, also known as Holy Island, has a population of around 180 people.

Despite the poor weather in some regions today, London was drenched in sunshine, with people in the capital enjoying a lazy Sunday outside.

It comes just a week after the hottest weekend of the year saw the mercury push past the 17C (63F) mark.

Forecasters last week said it could be the end of the month before Brits can enjoy warm temperatures again.

Warm southerly air responsible for the brief burst of joy at the start of April is being shoved away by a bitter plume from the Arctic.

Met Office forecaster Nicola Maxey said last week: “It is going to turn wet and windy with temperatures much colder than the beginning of the week.

“Polar maritime air will move in while colder air aloft will be brought down by rain making it feel much colder.

“There is a chance of wintry showers and hail in the north over high ground with even some to lower levels.

“It will stay fairly changeable and will remain fairly cold over into the weekend and over the next few days.”

The Met Office predicts a grim outlook for the rest of the month with gales, hill snow and below-average temperatures on the way.