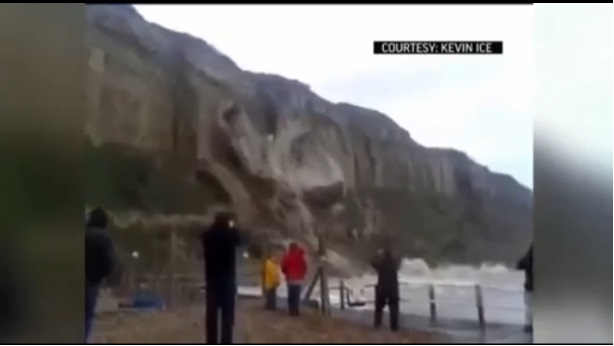 High tides and strong winds have caused extensive flooding and authorities warned sightseers that they were putting their lives at risk.

Severe flood warnings indicating there is “danger to life” were declared for the southwest English counties of Gloucestershire and Dorset, and for Wales.

Walls of sandbanks were built in the densely packed residential area of Sydenham in the east of the city and on land around the docks on the opposite side of the shore.

In the southwest English counties, coastal towns in Cornwall and Devon experienced flooding but officials said it was not as bad as feared.

Authorities and emergency services warned that people heading to the coast to see the dramatic conditions were dicing with death.

Police were called to move on dozens of sightseers who gathered at Burry Port in south Wales to see the sea whipped up by 112km/h winds at high tide.

“What they cannot know is what is in these waves. The sea takes up a lot of rock, rubble and stones and throws them violently about,” Carmarthenshire County Council spokesman Ron Cant said.

“Stones weighing up to [50kg] were being flung into the car park and people were literally putting their lives at risk by being there.”

Air, sea and land searches were launched for 18-year-old Harry Martin who has not been seen since leaving his home to take pictures of the weather near Plymouth in Devon. He was last seen heading towards a coastal path.

The Government’s emergencies committee Cobra met on Friday to discuss the weather situation.

Britain has been lashed by rain, high winds and high tides for two weeks.

Flood alerts were also issued in northwest France, which is being battered by high winds and huge waves.